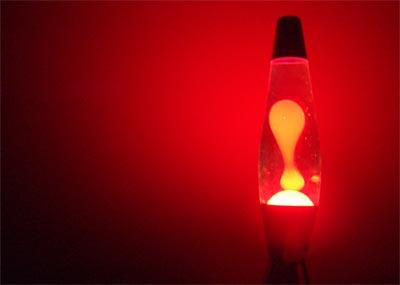 Since their first appearance in the 1960s, liquid motion lamps have been a familiar fixture in college dorms and teenagers' bedrooms all over the world. In the United States and many other countries, the novelty devices have become completely entrenched in popular culture. Even after all these years, people are still buying motion lamps, and the major manufacturers now offer hundreds of variations on the basic design!

In this article, we'll look at these popular devices to find out exactly what happens inside to produce such a mesmerizing display. We'll also explore some of the history behind liquid motion lamps, and even get you started on making your own basic lamp. The next time you see a motion lamp, you'll definitely be transfixed, because you'll know all about the amazing processes at work.

Liquid motion lamps are actually fairly simple devices. They are based on very basic scientific principles and consist of only a few simple components. They must have:

To create the floating blobs, the two compounds in a motion lamp must be immiscible, or mutually insoluble. All this means is that liquid A doesn't dissolve in liquid B -- the two don't mix, so you see two separate liquids, one floating on top of or within the other.

­­The classic example of immiscible compounds is oil and water. If you fill a jar with common mineral oil and water, you'll get a water layer with a layer of oil floating above it. This combination of water and oil in a jar has a similar look to a commercial motion lamp with its light turned off; in a cold lamp you see two separate layers.

The coolest thing about motion lamps, of course, is that they produce distinct amorphous blobs that rise and fall in the lamp's "globe" on their own. To produce this effect, you need to pick your two insoluble compounds very carefully. In our oil and water jar, the water ends up on the bottom because it has a much higher density than oil. Simply put, a liquid with a higher density pushes a lower-density liquid upward (for more on this, check out How Helium Balloons Work).

To get blobs that will float around, you need two substances that are very similar in density, so that the blobs can easily switch between rising and sinking. Then you need to be able to change the density of one of the compounds so that sometimes it is lighter than the other compound (and so floats to the top) and sometimes it is heavier (so that it sinks to the bottom). We'll look at how to do this in the next section.

The most common way to change the density of compounds is to change their temperature. Heating a compound activates the molecules so that they spread apart, making the compound less dense. If you have read How Thermometers Work, you know that heating water causes it to expand quite a bit. Cooling the compound down again increases the density.

If you look inside a motion lamp when it's turned off, you'll find a solid waxy compound on the bottom of the globe. This solid compound is only a little denser than the surrounding liquid compound. When you turn on the light at the base of the globe, here is what happens:

This is a pretty simple idea, but it's actually fairly complicated to balance all the elements -- the compounds, the heat source and the size of the globe -- so that the blobs are constantly moving around. In fact, the companies that produce commercial motion lamps guard their ingredients very closely, and motion lamp enthusiasts have had a very hard time reproducing the displays you see in commercial models.

In the next section, we'll look at the history of the liquid motion lamp. 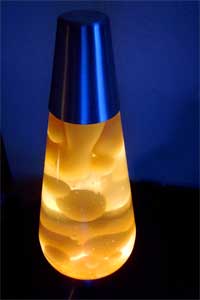 Make Your Own Motion Lamp

There are a number of Web sites that offer instructions on how to create your own liquid motion lamp.

You won't find any plans with the exact same material found in a commercial lamp, because this information is still top secret. Motion lamp recipes are so popular because coming up with exactly the right compound combination is an exciting chemistry puzzle. It's a real trick finding two compounds that will form the free-floating blobs you see in commercial lamps.

One of the simpler plans out there uses mineral oil as the blobs and a combination of 70-percent and 90-percent rubbing alcohol as the surrounding liquid. The trick with these ingredients is to balance the two different grades of rubbing alcohol until you get a good balance between the alcohol's density and the density of the oil.

You can color the blobs by adding insoluble dye, such as the sort used in permanent markers. For best results, you should find a fairly tall glass container for the globe. For a safe and effective lamp, don't use anything hotter than a 40-watt bulb to heat the globe. To learn how to make this basic motion lamp, check out this page.

Other homemade motion lamp designs use more complicated combinations of materials to create better displays. In most cases, acquiring all the necessary ingredients for building a lamp yourself is actually more expensive than simply buying a commercial model. It is an interesting project, however, and it's an excellent way to fully explore how liquid motion lamps work.

If you are interested in making your own lamp, keep in mind that dealing with these sorts of materials and constructing any device with a heating unit is potentially hazardous. Don't undertake such a project unless you have a good knowledge of the materials involved or you are assisted by someone who does. Make sure you aren't handling any dangerous chemicals and, as with any chemistry experiment, wear eye protection and an apron. Most of the sites that feature motion lamp plans also include disclaimers disavowing any responsibility because they are fully aware of the potential dangers involved.

To learn more about the history and construction of motion lamps, check out the links on the next page. You'll also find plenty of pictures of the many commercial motion lamp designs released through the years.

Can you recycle your old lamps?
Tween Room Ideas for Under $100
How to Dispose of Lava Lamps