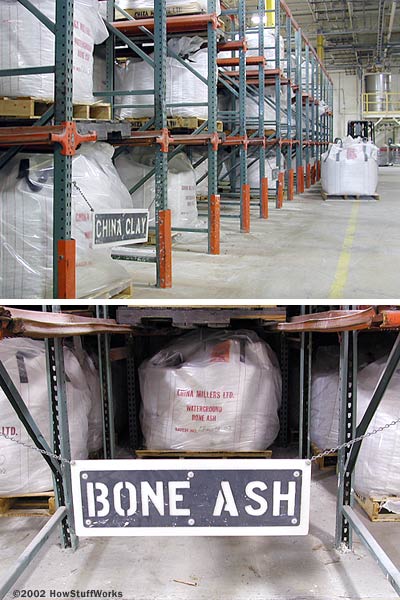 The clay making process begins in the batch-house. Pulleys hoist giant metric-ton bags of raw materials from pallets located on the factory floor. They are raised up to a platform about a story high. The bags are then left to hover over enormous hoppers into which their contents will be emptied.

From the hopper, the dry raw materials move to a high-speed blundger, where the materials are mixed with water to form a slurry. These slurries, stored in colossal tanks, will later be blended together to form the final mix and slip.

There are five main dry ingredients that go into the final mix:

These raw materials are both domestic and imported products. For example, the feldspar used at this plant comes from North Carolina, while the bone ash comes from Holland and the United Kingdom.

Although certain additives or pigments are necessary to get the ivory color in the finished product, in the slurry state, both clays appear to be slightly gray. To differentiate the final mix for the ivory from that of the white, green vegetable dye is added to the ivory mix. The vegetable dye will eventually burn out in the kiln. If the dye isn't added, there's no way to distinguish one clay from the other. It also helps to avoid getting the two clays mixed together.

During the clay stage, which is any time before glazing, all scrap clay that hasn't been contaminated by debris (perhaps it was dropped on the floor and picked up some lint) can be reclaimed. In fact, every finished product here is made from 80 percent virgin clay and 20 percent reclaimed (scrap) clay.

After the final mix has been prepared, it is pumped to a filter press to remove air and water from the mix -- the moisture level is reduced to about 20 percent. Final mix left in a liquid state is referred to as slip. We'll talk more about slip later in this article.

The sheets of clay that are formed in the filter press are then passed through an extruder to remove more air and change the flattened squares to a tube shape. These tubes are referred to as pugs. Resembling a really huge piece of chalk, each pug weighs in at a little more than 30 pounds (13.6 kg).

A robotic arm called a pug stacker collects the pugs and stacks them in a pyramid on pallets covered with plastic sheeting. The sheeting looks a little like the plastic wrap you would use in your kitchen, except that it's super-thick. Rolls of plastic sheeting hang on a wall nearby. Pieces are torn from the roll to cover the pyramid of pugs. The bottom of the plastic is tucked along the underside of the bottom row of pugs, forming a protective tent to maintain the humidity level.

Some pug stacks are marked "for cups only." The moisture content of these pugs is at about 15 percent rather than 20 percent.

Molds are used to transform the pugs and slip into plates, cups, bowls, pitchers and other china pieces. Let's take a look at how these molds are created.

Lenox has made the presidential china for five United States presidents: