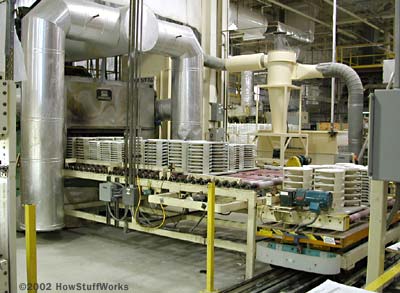 Once the greenware pieces (either from the pug molding or slip molding process) are finished, they're stacked on metal racks and sent to transportation lanes (holding areas). Eventually, they'll be moved to and passed along a conveyor belt through the bisque kiln. This gas-fired kiln, which is 135 feet (41 meters) long, runs in nine-hour cycles, meaning each piece of greenware is fired for exactly 9 hours. The temperature inside this kiln is 2,290 degrees Fahrenheit (1,254 C).

The temperature inside this kiln is a whopping 2,290 degrees F!

After the whiteware is removed from the kiln, each piece gets a bath. Smooth stones and water are used to polish each piece of china -- the vibration of the stones smoothes away the rough exterior (pieces fresh from the kiln feel a little like very fine-grained sand paper). This process is called the vibratory finish.

After the stone bath, the whiteware is run through a giant industrial dishwasher and dryer. At the other end, each piece of china is closely inspected for any damage or flaws. Pieces that pass muster move on to the glazing process.

China isn't something you think about every day. In fact, if you're like many folks, you probably only use the good stuff for special occasions. People often do this because it seems so delicate. As it turns out, china is actually a lot stronger than you would think -- a whole lot stronger. Some clever marketing people at a large department store in Canada decided to show folks just how strong the good stuff can be by supporting the entire weight of a Lola race car on top of four Wedgewood teacups!

So, what makes china so strong? We've already mentioned one thing: The bone ash in bone china makes it stronger than other porcelain products. Another thing is the glaze. Think of it as liquid glass that, once heated, forms an incredibly strong protective shell. The glazing process at Lenox is very interesting to watch. Let's take a closer look.