What are carbide tips? 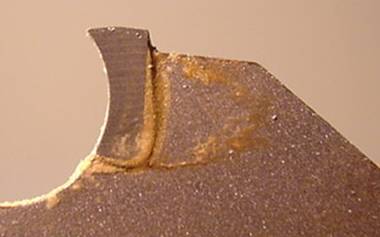 The carbide tip on a typical circular saw.

Carbide (or more specifically tungsten carbide and titanium carbide) is a very common material on any sort of cutting tool: For example, saw blades, lathe bits, drill bits, router bits and dental drilling tips are generally made of carbide. Carbide is so popular in these sorts of tools because it stays sharper longer than most other materials. Additionally, some ball-point pens use carbide balls because it helps the pen last longer.

With something like a carbide-tipped saw blade, the main body of the blade is made of steel. The small tips of carbide are brazed on to the body. A good carbide tip might hold an edge ten to twenty times longer than a tool steel tip.

The carbide tip on a typical circular saw.

Carbide tips do get dull eventually. You sharpen them using the same techniques you would use with tool steel, but because they are so hard, you use a different abrasive. Something coated in diamond or a carbide abrasive wheel is common.

If you've read How Diamonds Work, you know that diamond (pure crystalline carbon) is the hardest material there is. Moissanite -- silicon carbide -- is very close. Tungsten carbide and titanium carbide are both made of the metal combined with carbon. They range between 8 and 9 on the MOHS scale.

Tools aren't made entirely of carbide partly because it would be very expensive, but also because the tool would be very brittle. Steel is actually a better material for the body of the tool because it is tougher and will not crack or shatter.

10 Multifunction Tools on the Market
What's the best type of torque wrench to use for headlights?
What are some repairs that require vise-grip pliers?