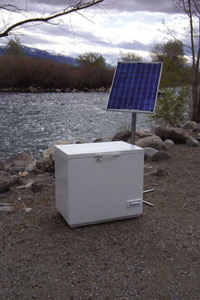 ­While developing solar-powered refrigeration systems for the International Space Station (ISS), a couple of NASA scientists decided the technology would do well in the Earth-bound world, too. Scientific-study outposts, eco-resorts, remote hunting cabins, street-vendor food carts and areas of the developing world with no access to electricity could all benefit from solar-powered refrigeration. Not only food but also many medications and vaccines need a cool environment to remain viable. It's a fairly essential technology.

Those NASA photovoltaics engineers created SunDanzer, a line of solar-powered refrigerators and freezers.

The SunDanzer refrigerator works a lot like a traditional one, using a vapor-compression system for cooling. Basically, a refrigerant gas like ammonia is compressed (placed under pressure), causing it to get hot; as it cools back down, it condenses into a liquid. When this liquid travels to a lower-pressure area, it expands and vaporizes. This vaporization absorbs heat, rapidly cooling the coils of the refrigerator.

This is probably how your refrigerator works. The difference between your refrigerator and a solar-powered SunDanzer is that instead of running all the moving parts of the compression-expansion system by plugging into the power grid, you plug into a solar-panel setup. The system simply uses photovoltaic cells instead of coal or nuclear power to generate electricity. It hits the temperature of any other refrigerator (around 38 degrees F, or 3 degrees C, for most people).

To supply enough power to maintain that temperature, the unit's solar panel needs about five hours of sunlight a day [source: NASA]. But it can store excess solar-generated power so it'll stay cold for a week without sunlight. And there's the option of supplemental battery power so food will still stay cold in a pinch. Most solar-powered cooling systems come with this type of backup.

One solar-powered refrigerator model that does not have such a high-tech backup is the so-called "eco-fridge" developed by a 21-year-old student in Britain. That model has no moving parts at all.