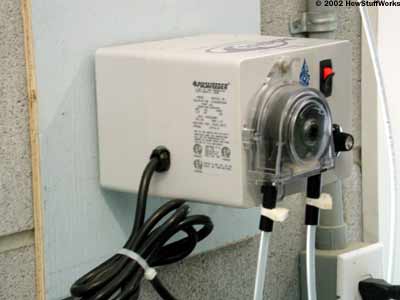 An automated chlorine feeder hooked into the pump and filter system

A pool's filter system does the heavy lifting in keeping the water clean, but it takes chemistry to do the fine-tuning. It's important to carefully manipulate the chemical balance in pools for several reasons:

To take care of pathogens in the water, you have to introduce a disinfecting agent that will get rid of them. The most popular pool disinfectant is the element chlorine, in the form of a chemical compound such as calcium hypochlorite (a solid) or sodium hypochlorite (a liquid). When the compound is added to the water, the chlorine reacts with the water to form various chemicals, most notably hypochlorous acid. Hypochlorous acid kills bacteria and other pathogens by attacking the lipids in the cell walls and destroying the enzymes and structures inside the cell through an oxidation reaction. Alternative sanitizers, such as bromide, do basically the same thing with slightly different results.

Chlorine is typically prepared in liquid, powder or tablet form (though some professionals use gaseous chlorine), and it can be added to the water anywhere in the cycle. Pool experts generally recommend adding it just after the filtering process, using a chemical feeder. If it's added directly into the pool, using tablets in the skimmer boxes, for example, the chlorine tends to be too concentrated in those areas.

One problem with hypochlorous acid is that it's not particularly stable. It can degrade when exposed to ultraviolet light from the sun, and it may combine with other chemicals to form new compounds. Pool chlorinators often include a stabilizing agent, such as cyanuric acid, that reacts with the chlorine to form a more stable compound that does not degrade as easily when exposed to ultraviolet light.

Even with a stabilizing agent, hypochlorous acid may combine with other chemicals, forming compounds that are not very effective sanitizers. For example, hypochlorous acid may combine with ammonia, found in urine, among other things, to produce various chloramines. Not only are chloramines poor sanitizers, but they can actually irritate the skin and eyes and have an unpleasant odor. The distinctive smell and eye irritation associated with swimming pools are actually due to chloramines, not ordinary hypochlorous acid -- a strong smell usually means there is too little free chlorine (hypochlorous acid), rather than too much. To get rid of chloramines, pool custodians have to shock treat the pool -- add an unusually strong dose of chemicals to clear out organic matter and unhelpful chemical compounds.

Chloramine formation is related to the second major element in pool chemistry, maintaining the right pH in the pool.

These days, most swimming pools are built with underground lights, partially for aesthetic appeal but mainly to let night swimmers see what they're doing. In one common underwater lighting design, an incandescent light bulb is sealed in a water-tight fixture, which sits inside a niche embedded in the pool wall. The insulated electrical wire runs into the fixture through a special seal, keeping water away from the conductive elements. The wire runs back to the house (or wherever the power source is) through a long tube, which is filled with water most of the way. There is enough extra wire in the tube that you can pull the entire fixture out of the niche and up above the water level when you want to change the bulb.

Some people use fiber-optics to light their pools, instead of embedded incandescent fixtures. In this system, the actual light source doesn't have to be underwater, so you can skip the whole bulb-changing, water-proof electrical-component issue entirely.