10 Green Lawns Without a Blade of Grass 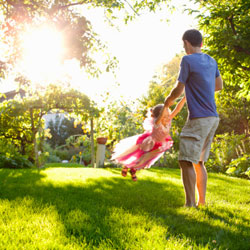 Well-manicured grass lawns are as American as baseball and apple pie. These lush expanses of turf became fashionable in the early 19th century among the upper class, who could afford to pay a crew of laborers to maintain the grounds by hand. The human-powered lawnmower, invented in 1830, and later the gasoline-powered lawnmower, developed in the early 1900s, made it easier for the average homeowner to keep his or her yard immaculately trimmed. The introduction of artificial fertilizer in 1909 and herbicides in the 1940s further simplified lawn care. In the booming suburbs of the 1950s, neat front yards were no longer a luxury for the wealthy few; rather, they were often a requirement. Across the country, neighborhood covenants and city ordinances compelled homeowners to cut and water their grass or face citations and fines. Many of these rules -- known as "weed laws" -- are still on the books today.

For some folks, though, the grass is always greener ... when there is none. These environmentally-minded homeowners decry the tremendous amount of water and gasoline used to irrigate and mow the estimated 50,000 square miles (128,000 square kilometers) of lawns in the United States [source: Lindsey]. They also worry about the effects of fertilizer and herbicides that wash out of lawns and into lakes, rivers and oceans. All for a crop that doesn't produce anything but curb appeal.

Whether you're concerned about the environmental consequences of lawn care or you just hate mowing -- check out our 10 suggestions for landscaping your yard without using a blade of grass.