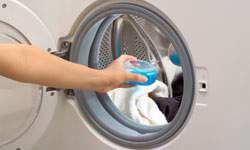 You must use HE detergent for an HE machine. See more green living pictures.
iStockphoto.com/Thinkstock

You've probably seen commercials or read about the next wave in laundry machines -- the high-efficiency washer (also called "HE"). You may even have one of your own. Here's why they're so special:

A typical washing machine accounts for more than 20 percent of your water bill. It uses 50 gallons of water or more per cycle, which really adds up, especially if you have a big family and run lots of cycles per week. On the other hand, high-efficiency washing machines use only 18 to 25 gallons of water per load. That's half the amount of the regular washer, which can mean considerable savings in your monthly family budget.

How do these washers do it? Most of them are front-loading machines, which require less water and detergent. And instead of using a big water-filled tub with an agitator like traditional machines, with an HE washer, the clothes go in a "tumbler" and gently tumble around in a shallow pool of water. HE washers also tend to spin faster, which means your clothes have less water in them when they go into the dryer, resulting in shorter dryer times. Bonus!

Because of the way the HE washer tumbling system works, though, you have to use a special HE-branded detergent when you wash your clothes. Otherwise you'll end up with way too many suds, which can make a mess and shorten the life of your HE washer.

Let's take a look at some of the top-ranked detergents available for high-efficiency washers, as well as some more information about HE machines.

Tide brand detergent is the current market leader, with various types of HE and standard detergents, and Tide 2X Ultra for HE washers receives high marks from Consumer Reports. The "2X" refers to the fact that the detergent is concentrated, which means it can clean more loads with less detergent (and it's stored in a smaller, more compact bottle). It also includes a color-safe bleach alternative, so you don't have to use separate bleach. This detergent comes in a liquid form only and costs about $0.24 per load.

Because an HE washing machine tumbles instead of agitates, it creates more suds than a traditional machine. Therefore, HE detergent must be low-sudsing.

4: All 2X with Oxy ActiveTM 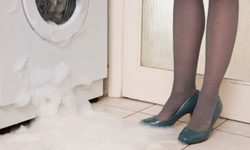 If you don't use HE detergent, suds will overflow from your HE machine.
Jupiterimages/Pixland/Thinkstock

All 2X with Oxy-Active is another concentrated liquid detergent (no powder version available). The "Oxy Active" is a bleach alternative and stain lifter, said to remove grass, blood, wine and chocolate. It costs approximately $0.15 per load.

You might think you can use regular detergent in the HE washer -- just as long as you use less of it. After all, less soap means less suds, right? Unfortunately, testers have determined that simply using a smaller amount of the regular stuff won't do the trick. You must use HE detergents, which are designed to clean more effectively in low-water conditions.

Gain Original Fresh HE comes in powder form only. It's rated well in Consumer Reports for its cleaning efficiency, cost and scent. It costs about $0.15 per load.

Some HE washing machine manufacturers will actually void your machine's warranty if you use non-HE detergent. Oversudsing can lead to a residue buildup in the machine -- specifically the rubber gasket in the interior door. This residue can eventually lead to mold growth and odor, so it's important to use the right detergent for your machine. 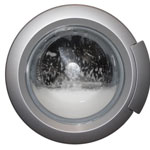 Up & Up Fresh Breeze detergent is carried exclusively at Target stores. It comes in liquid form and is popular for its scent. Up & Up costs about $0.13 per load.

Here's another reason to use only HE detergent in your HE washer: Since the washer doesn't use as much water, regular soap may not properly rinse from your clothing, which may not seem like a big deal until you get caught in the rain and you have soap bubbles on your clothes.

The final HE laundry detergent on our list is from Seventh Generation. It comes in a powder only and is made from plant-derived cleaning agents and enzymes. If you like to keep your household cleaners "green," Seventh Generation is a good choice. It's pricey, though, at approximately $0.36 per load.

For more on laundry and appliances, check out the links on the next page. 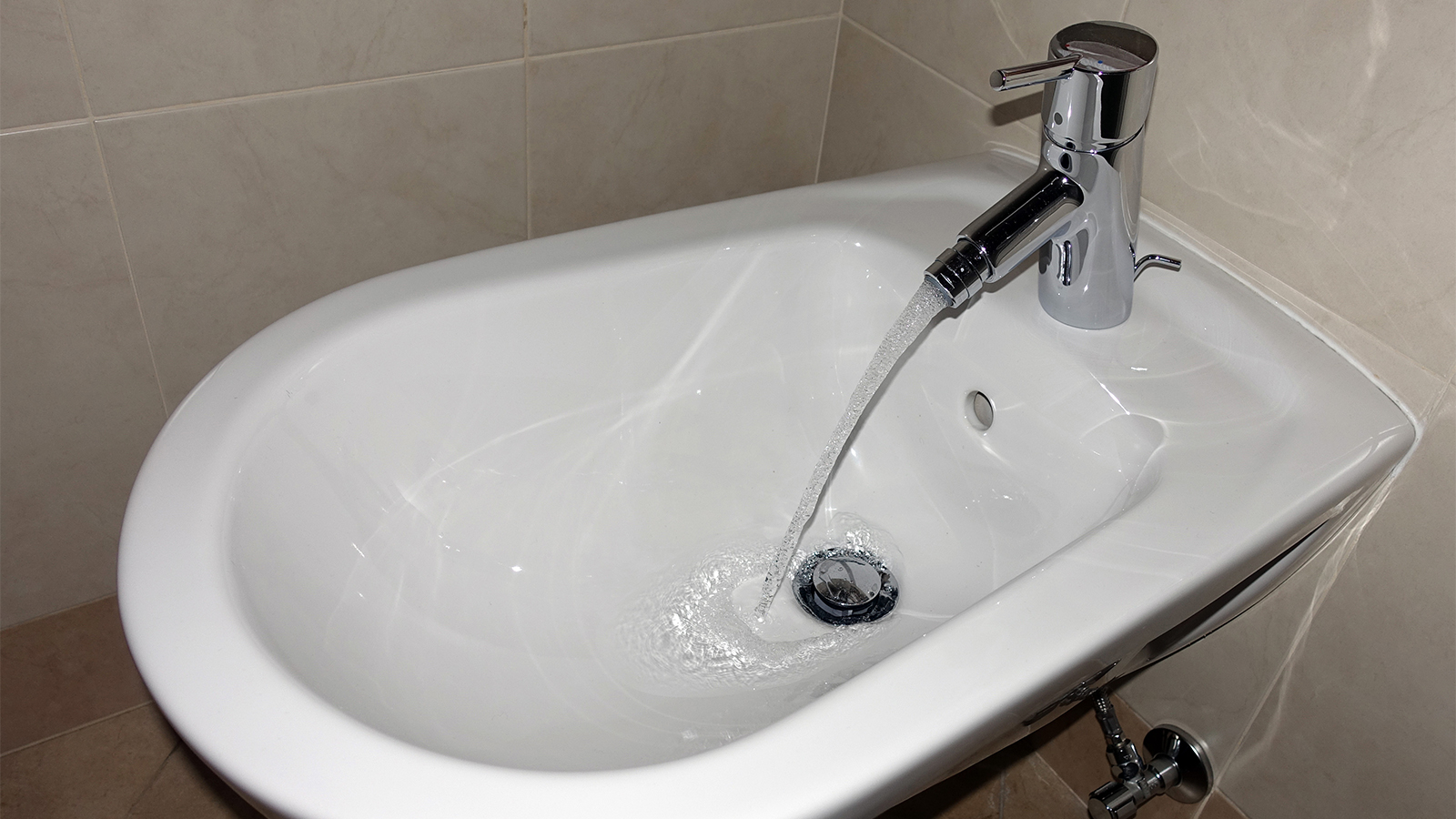