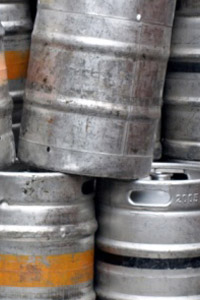 Kegs are durable, portable, and ready for any occasion.
Hemera/Thinkstock

Whether it's standing proudly at the center of a party or hiding discretely in the back room of a pub, the keg is the vessel of choice for beer. That's why more than 60 million gallons of beer are sold in kegs every year. After all, what better way could there be to move that precious liquid around than in a big, round barrel that can be rolled, stacked and tapped? No need to worry about bottle caps or broken glass; the keg is incredibly durable, requires no cap and is completely recyclable [source: Beer Institute].

But what's going on inside a keg? While beer bottles are transparent, kegs reveal nothing of the complex and uneasy chemical truce that's been established in their dark interiors, nor of the technology that makes them work. When we press on the tap of a keg at a party, or when we order up a pint at the bar, we take it for granted that beer will flow forth with just the right proportions of foam, carbonation, coolness and flavor. But the truth is that a great deal of thought has gone into achieving that perfect balance.

A keg is a fancy version of your basic barrel. In the factory, a sheet of stainless steel is rolled into a cylinder and welded together. Then, at the cylinder's midpoint, a set of ribs is pressed into it for added rigidity. Next, top and bottom steel plates are stamped out and likewise welded into place. The steel in question, a particular alloy of chromium, nickel, manganese and several other elements, is used because it welds cleanly leaving a smooth joint -- this is very important for a food-grade container because you don't want any rough surfaces where bacteria can set up shop. [source: nickelinstitute.org]

The airtightness of a keg is incredibly important -- it's what keeps the beer from becoming flat and flavorless. Still, the beer has to come out somewhere, and that's why there's a spear. The spear is a long metal tube that reaches almost to the bottom of the keg. Despite its warlike name, the spear is basically a big metal straw through which beer can travel up from the bottom of the keg and out through the tap at the top [source: nickelinstitute.org].

Just what are taps, and why do English and American brews refuse to come out of the same ones? We'll get to that in a bit. Right now, let's find out why all kegs are not created equal. 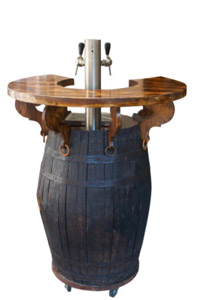 Aficionados say this is the best way to drink beer.
©iStockphoto.com

When a pub orders up its draught beer supply, usually what's delivered is a truckload of standard kegs known as "half barrels." The half-barrel is also the garden-variety keg commonly nestled in a big bucket of ice at a frat party. It's called a half-barrel because the "barrel" is a legal unit of measure used for import and export statistics. In the U.S., a barrel, by definition, is 31 gallons (117 liters) of fermented beverage. So, as you might have guessed, a half-barrel holds half that amount -- somewhere between 14 and 16 gallons (53-60 liters), or by a more agreeable measure, 124 pints (117 metric pints). This is slightly larger than the 50 liter (13 gallon) standard European keg. Fill either kind of keg with beer, and you've got an object weighing about 160 pounds (73 kilograms). By contrast, an empty half keg is a lonesome but hardly insubstantial object that weighs approximately 30 pounds (14 kilograms) [source: Wayland Works].

If you're at a smaller party where people aren't jumping naked into the pool and spraying shaving cream all over somebody's car, then you might encounter a more civilized vessel -- the quarter keg, aka the "pony keg." It's called a pony because, like ponies, the quarter keg is small -- but it can still hold 90 pounds (41 kilograms) of beer. [sources: Wayland Works, Word Detective].

For the sedate dinner party, there's the refined and aerodynamic "torpedo keg" (or the "sixth barrel") which holds a little more than 5 gallons (19 liters). And for an evening with friends, there's the very restrained "mini-keg," affectionately known as "bubba," which provides a pleasant 10 and a half pints (10 metric pints) with which to while away the football game. Last but hardly least is the Beer Ball, a plastic number cradling 5 gallons (19 liters) in its svelte interior [source: Micromatic].

There are other, more arcane vessels lurking in the margins of beer culture. The Cornelius, or "corny" keg, is the basic soda canister that servers are always changing at fast-food joints. Capable of holding 5 gallons (19 liters) of liquid, the corny keg was long ago identified by home-brewers as the ideal vessel for their purposes. [source: Brew Ware].

All kegs, no matter their size or style, must deal with the same vital issue: how to get the beer out. On the next page we'll talk about the complex challenges this seemingly simple problem presents.

Is your firkin workin'?

The firkin is an old-school wooden cask that ale used to be stored in before things got fancy. A firkin holds about the same amount as a pony keg but has a rounded shape that's designed to allow sediment to collect at the bottom without permitting it to exit the tap. Cask ale, or beer served directly out of a firkin, has made a comeback in recent years. Aficionados praise its full and nuanced flavor, and many believe that to drink cask ale is to enjoy beer as it was meant to be. [source: Beer Magazine] 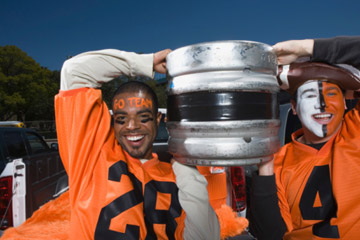 A tap is a one-way valve that, when opened, permits beer to escape but allows nothing back in. Of course, a certain amount of pressure is lost with the exiting beer, and this is why the keg has to be re-pressurized with either air (via a party pump) or one of those fancy gases. But if you're using CO2 or nitrogen to pressurize your keg, not just any old tap will do. You need a coupler.

Couplers are taps designed for kegs that are pressurized with gas, and because different beers need different levels of pressure, there are seven different kinds of taps. American beers follow the D system, German beers follow the A system, Bass and Anchor Steam follow the G system, and so forth [source: Micromatic]. Different beers require different amounts of pressure because of differences in aroma and flavor. The more aromatic and flavorful beers are less carbonated so they need less pressure to maintain that low carbonation level [source: Wayland Works].

Then there's the matter of temperature. The warmer a beer gets, the faster it goes flat. That's because heat causes the carbon bubbles to expand and pop out of the beer more rapidly. This is especially bad news for highly carbonated lagers like Coors or Molson. In bars where the kegs are kept far from the taps, the beer must travel through long lines to the tap. To keep the beer from warming up as it travels, a glycol system keeps the lines safely insulated and cooled [source: Wayland Works].

A keg is a hefty object -- even when its empty, a half keg is an unwieldy thing to move around. That's why it's recommended that you roll it - ideally with a dolly, but failing that, with your hands. If it has to go somewhere it can't be rolled, best to get a second person, put the keg on its side and lift from either end (remember to bend your knees!) [source: OSHA].