How the Bioscleave House Works 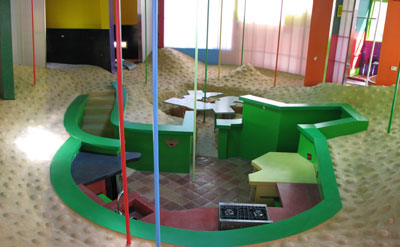 The Bioscleave House is not the first destiny-altering project to be constructed. In 1995, Arakawa and Gins completed the "Site of Reversible Destiny," a theme park of sorts in Japan. The park is a labyrinth meant to destroy the visitor's sense of stability; the museum guide encourages you to enjoy being off-balance. Still, you can borrow a helmet at the front gate for the spills that may occur as you traverse the steep curving paths and the mazes [source: Howard]. Despite the frequent falls and the occasional broken bone, it's a popular tourist spot [sources: Bernstein, Newsweek].

In 1997, the Guggenheim Museum SoHo presented an exhibit of Arakawa and Gins' work. The first part of the exhibit was an early collection of paintings called "The Mechanism of Meaning." The paintings are little puzzles, with instructions like "Think One Say Two" [source: Smith]. The paintings offer a glimpse of how Arakawa and Gins might have tried to stimulate our brains, change our perception and challenge our thinking of what constitutes art if they hadn't turned to architecture.

The second part of the exhibit, "Reversible Destiny Architecture," was the first glimpse the United States had of this kind of housing. One example was the Critical Resemblances House, which was constructed as part of the Japanese park. In the accompanying text, Arakawa and Gins delighted in the fact that "it could take hours to go from the living room to the kitchen" and that it might "take several days to find everywhere in the house that the dining room turns up" [sources: Smith, Kawash].

In reviewing the exhibit, one critic wrote that it was impossible to tell what it would be like to live in such a landscape. In 2007, Arakawa and Gins constructed a housing project to determine the answer. The Reversible Destiny Lofts are located in a Tokyo suburb and are made up of nine apartment units. The apartments contain many of the same features as the Bioscleave House, including a sunken kitchen and an erratic floor. One glass door is so small you have to crawl out.

Still, the entire project met building code, and people have been paying $763,000 to live there, even though a regular apartment in the same neighborhood costs half as much [source: Newsweek]. Some interested parties reported that the price might be high for an apartment but low for a work of art [source: Knight Ridder]. Each loft comes with a set of directions, and living in one is supposed to help reframe what is possible. Arakawa claims that the elderly residents of the apartment have thanked him, saying that in just three or four months, they feel much healthier [source: Bernstein]. The apartments can also be preassembled, so similar sites could be exported around the world.

If you're interested in homes and death, don't reverse your destiny to go to the next page.

What's next in reversible destiny?

When you've refused to die, you have lots of time to work, so Arakawa and Gins are preparing for even larger reversible destiny projects. On their Web site, the pair presents plans for Hotel Reversible Destiny -- you may never check out once you get a glimpse of how your life could be better. Arakawa and Gins call the project an "evolution accelerator"; by accelerating evolution, we'll get to the point where we accept life doesn't end.

The site also contains plans for the "Museum of Living Bodies," which appears to be an entire city that will serve as a reversible destiny laboratory. Included on the grounds are apartments, parks, restaurants, hotels and a university.