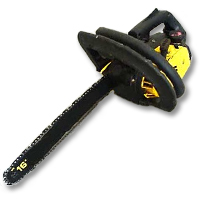 ­Whether you are a homeowner cleaning up a few trees and limbs in the yard, a farmer cutting firewood and keeping the pasture clear, or a firefighter cutting a firebreak for a forest fire, you know how handy a chain saw can be!

Chain saws are also great when you are interested in getting up close and personal with gasoline power. If you want to see a basic two-stroke engine in its simplest application, then a chain saw is the best place to start! In this article, we'll learn about chain saws and two-stroke engines by completely dismantling a typical 16-inch chain saw. You will also learn how magnetos, centrifugal clutches and carbs work in the process! 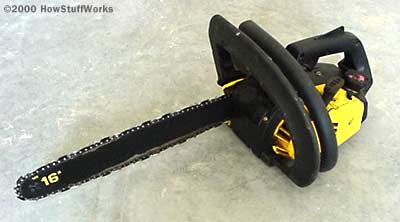 This chain saw has the following features:

One of the most amazing things about the engine is the horsepower that it develops for its weight. It approaches 1 horsepower per pound of engine weight! This is possible because the engine is air-cooled (eliminating the weight of the radiator, water pump and water) and two-stroke. A two-stroke engine, as explained in How Two-stroke Engines Work, has no valves or cams and generates power on every rotation of the crankshaft (twice as often as a four-stroke engine). This feature of the two-stroke engine means that it can generate twice the power of a four-stroke engine of the same displacement. 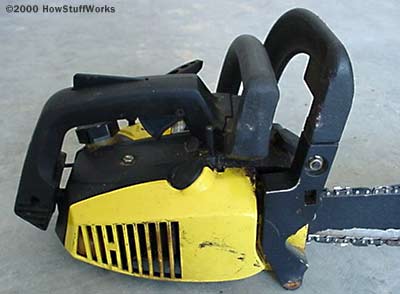 Here is the right side cover plate for the saw:

When you remove the cover plate, you expose the centrifugal clutch:

You can also see the spark arrestor and the spark plug:

Also visible is one end of the gas tank.

On the other side of the engine you find the pull-cord and the air intakes: 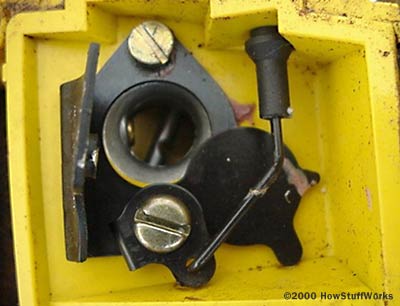 There's nothing to the choke -- it is just a plate that obstructs air flow.

This short video of the choke in operation (0.5 MB) shows just how simple the choke really is. The section later in the article explaining the carb also explains the choke in detail.

Removing the pull-cord assembly reveals a self-contained unit that holds the cord's spool and spring:

Its center shaft fits into two spring-loaded pawls that engage when you pull the cord to start the engine, but otherwise spin freely. The pawls are mounted on the flywheel, shown here:

In the above photo, the flywheel is the aluminum disc on the left with the blades. These blades suck in air and force it back and around the fins on the combustion chamber to cool it. The flywheel also contains the magnets that power the magneto -- the white block on the lower right side of the flywheel. The hole above the magneto is where the carb attaches.

At this point, you can see that we have stripped the saw down to the engine and a top, bottom and front cover plate. Let's look a little more closely at the clutch, magneto and carb before moving on to the engine itself. 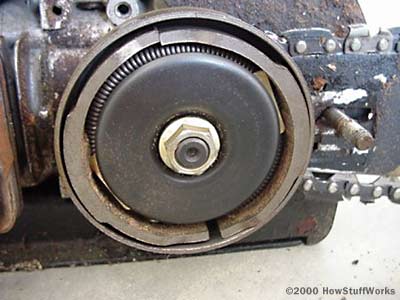 The clutch consists of three parts:

There are several advantages to a centrifugal clutch: 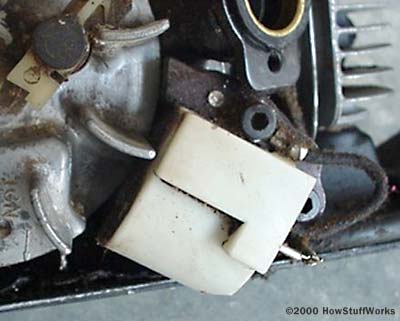 The magneto is the white block in the following photo:

The idea behind a magneto is simple. It is basically an electrical generator that has been tuned to create a periodic high-voltage pulse rather than continuous current.

An electrical generator (or a magneto) is the reverse of an electromagnet. In an electromagnet, there is a coil of wire around an iron bar (the armature). When you apply current to the electromagnet's coil (with a battery, for instance), the coil creates a magnetic field in the armature. In a generator, you reverse the process: You move a magnet past the armature to create electric current in the coil.

This magneto consists of five parts:

You can see the two magnets in the following photo:

When the magnets fly past the U-shaped armature, they induce a magnetic field in the armature. This field induces a small amount of current in the primary and secondary coil. What we need, however, is extremely high voltage. Therefore, as the magnetic field in the armature reaches its maximum, a switch in the electronic control unit opens. This switch breaks the flow of current through the primary coil and causes a voltage spike (of perhaps 200 volts). The secondary coil, having 100 times more turns than the primary coil, amplifies this voltage to approximately 20,000 volts, and this voltage feeds to the spark plug. 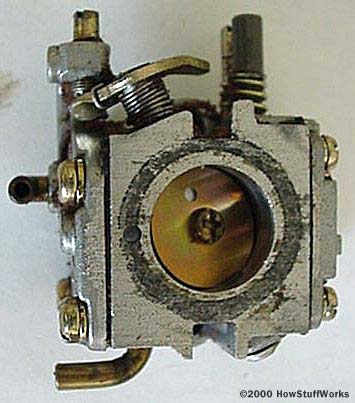 Photo 1: This is the side that connects to the engine.

The carburetor on a chain saw is pretty simple, as carbs go, but it's not entirely uncomplicated. The job of the carb is to accurately meter extremely tiny quantities of fuel and mix it with the air entering the engine so that the engine runs properly.

The carb on a chain saw is simpler than most carbs because it really has only three situations that it has to cover:

No one operating a chain saw is really interested in any gradations between idle and full throttle, so incremental performance between these two extremes is not very important. In a car, the many gradations are important, and this is why a car's carb is a lot more complex.

You can see the carb for the chain saw in the following two photos:

Photo 2: This is the side that receives the outside air through the air filter.

This short video (5.1 MB) takes you on a quick tour of the carb.

Here are the parts of a carb:

Watch the video for a better look at these parts.

The carb is operating "normally" at full throttle. In this case, the throttle plate is parallel to the length of the tube, allowing maximum air to flow through the carb. The air flow creates a nice vacuum in the venturi, and this vacuum draws in a metered amount of fuel through the jet. You can see a pair of screws on the top-right of the carb in photo 1. One of these screws (labeled "Hi" on the case of the chain saw) controls how much fuel flows into the venturi at full throttle.

When the engine is cold and you try to start it with the pull-cord, the engine is running at an extremely low rpm. It is also cold, so it needs a very rich mixture to start. This is where the choke plate comes in.

When activated, the choke plate completely covers the venturi (watch this video of the choke plate to see it in action). If the throttle is wide open and the venturi is covered, the engine's vacuum draws a lot of fuel through the main jet and the idle jet. Usually, this very rich mixture will allow the engine to fire once or twice, or to run very slowly. If you then open the choke plate, the engine will start running normally. 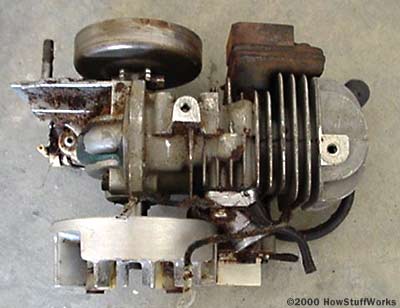 Top view of the engine

With all of the cover plates removed, what you have is the naked engine, as seen in these two photos:

Bottom view of the engine

What you can see in these photos is that a chain saw is really just an engine with some cover plates bolted onto it, a handle to hold it, and a chain and bar to cut with. The engine is the main structural member that everything bolts onto!

In the photos above you can see all the major components:

These three videos are helpful in understanding the engine: 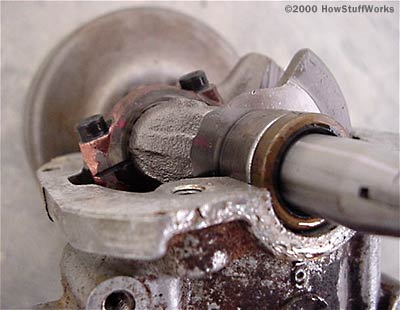 You can remove the flywheel, magneto, spark plug, muffler and centrifugal clutch and what you are left with is the combustion chamber, piston, connecting rod and crankshaft. If you remove the crankshaft cover, you expose the crankshaft, as seen in this photo:

The two ends of the crankshaft run on roller bearings, as seen here:

If you pull on the crankshaft, the piston comes with it:

The connecting rod connects the piston to the crankshaft. A set of roller bearings keeps everything smooth at the crankshaft end.

So there you have it -- a complete chain saw! It is a miracle of modern manufacturing technology that you can buy one of these, containing several hundred parts, for about $100. And it will run really well for years with little or no maintenance.

For more information on chain saws and related topics, check out the links on the next page.