Enjoyable outdoor activities can have the fun taken out of them if you're being eaten alive by mosquitoes or gnats. So rather than stay indoors, many people look for ways to get rid of the unwanted pests -- including bug zappers. Bug zappers, or, by their more technical name, electronic insect-control systems or electrical-discharge insect-control systems, attract insects with light and then kill then with a "zap" of electricity. They use ultraviolet light, or neon or mercury lighting, which insects seem to be drawn to. A transformer turns regular 12-volt electric current into 2,000-plus volts in the mesh screens around the lights. The space between the screens is about insect-sized, so when an insect flies in, it completes the electric circuit and is killed by the strong current. Bug zappers have the ability to put an end to more than 10,000 bugs in just one evening.

However, a bug zapper might not be the best answer to your mosquito problem. Timothy Frick and Douglas Tallamy from the University of Delaware checked through 14,000 insects killed in six zappers in different spots around Newark, Delaware, and found that only 31 were biting gnats or mosquitoes -- that's less than one-quarter of one percent. The truth is that mosquitoes are not attracted to ultraviolet light in the way that many other insects are, making the usual type of bug zapper almost useless in getting rid of them. Worse, the sheer number of non-harmful insects killed by the zappers can take a heavy toll on the ecosystem.

There are electronic bug zappers that deal specifically with mosquitoes by emitting the pheromone octenol, sometimes in combination with carbon dioxide. It's the carbon dioxide in our sweat and breath that attracts the biting insects, so this type of insect control system attracts mosquitoes. Alternatively, you can cut the mosquito population by use of pesticides. And if you prefer to distance the mosquitoes rather than killing them, there are insect repellants, ranging from spray-ons for your skin to citronella candles and torches to burn by your picnic table. 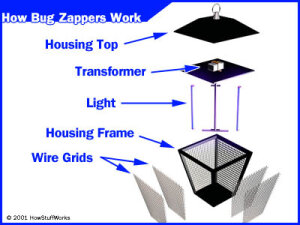 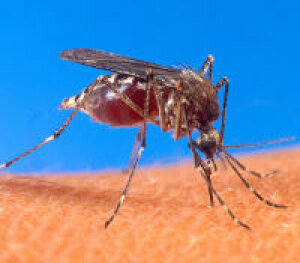