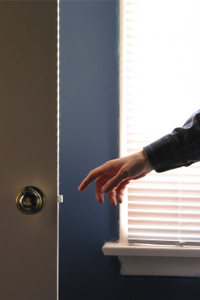 The static electricity caused by clothes tossing in the dryer is much like the one that causes a shock when you touch a doorknob.
©iStockphoto.com/David Elfstrom

For many people, the first thing that comes to mind when they think of dryer sheets is static electricity. Dryer sheets are supposed to keep clothes from creating static electricity; if you don't use one, you might have to peel your clothes apart as if they were glued together. What's going on is similar to the shock you get after you shuffle your feet across a carpet on a dry winter day and then reach for a doorknob.

In both cases, a static charge has built up as the result of two very different materials rubbing against each other. The rubbing can knock loose electrons -- the outer, orbiting, negatively charged parts of an atom -- from some fabrics onto others. So your sweater, for example, might end up with too many electrons and a negative charge while your sock might have too few electrons a positive charge. Opposites attract in electricity, which is why the sock might seem to have suddenly attached itself to the sweater.

Another problem is that once a material such as cotton or wool gets a static charge, it might take a while to wear off. So that shock you feel when your fingertip gets close to the doorknob comes from the very fast dispersal of the static charge your body has been holding onto. The doorknob is highly conductive, meaning it's able to move a lot of electrons very quickly. Your typical sweaters and socks aren't very conductive, so the static charges they pick up are slow to dissipate. This is also why a humid day or taking your clothes out while still damp can prevent static. Water is a great conductor, so it disperses a charge before it can build up [source: Krasicky].

If you'd rather wait until your clothes are completely dry, though, dryer sheets might be the way to go. Because static in the dryer is caused by too many loose electrons giving clothing atoms a negative charge, all dryer sheets have to do is balance the electrons with ions, particles with a positive charge. And as we learned in the previous section, fabric softeners are cationic, or positively charged, so they equalize the electrons to prevent static.

Dryer sheet makers solved the static problem early on, leaving them free to add other features such as long-lasting scents. Read on to learn what's in a typical dryer sheet, and whether the chemicals it uses could make you sick.

Is America Finally Ready for the Bidet?