How green is a self-contained composting toilet? 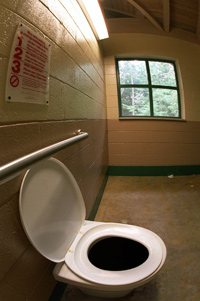 Many of us work hard to keep our homes as environmentall­y friendly as possible. We switch to compact fluorescent light bulbs, install bamboo floors instead of vinyl flooring and lug groceries home in reusable canvas bags. But some of us may draw the line when it comes to our toilets. We want to save water. We may even have installed a low-flow toilet, but the idea of getting up close and personal with our waste via a self-contained composting toilet may seem like a bit much. With memories of rancid portable toilets and primitive outhouses dancing through our minds, we first want to know, how green is this toilet?

In this article, we'll take a look at the environmental impact of a self-contained composting toilet, and whether it's a boon to the Earth or a crappy idea all around. First, though, let's go over how a composting toilet works. The process works the same as the composting pile you may have for your kitchen scraps. Aerobic bacteria within the waste break it down with the help of air, heat and time. Someone does have to stir material regularly, and add materials such as sawdust or popcorn to keep those bacteria at work. The result is an earthy nutrient-filled organic matter known as humus. One person would produce approximately 80 pounds (36 kilograms) of humus a year [source: Steinfeld and Anderson].

Both have the same goal, though: to destroy the pathogens and recycle our excrement without using water. Instead of flushing, the waste drops down a pipe to the composter, which is hidden from view with a trap door or screen. But how much water is saved? Are there any hidden costs to the environment? We'll see what all the stink is about on the next page.

Here are the parts of a self-contained composting toilet.
HowStuffWorks

The average American uses 74 gallons (280 liters) of water per day, one-third of which splashes down a flushing toilet [source: Steinfeld and Anderson]. An older toilet may swallow up to 7 gallons (26.5 liters) per flush, though federal law now calls for 1.6 gallon (6.1 liter) low-flow models in new homes [source: Nash]. Can we do better? A composting toilet may save more than 6,600 gallons (24,984 liters) of water per person a year [source: Steinfeld and Anderson].

Not using water to flush a toilet also cuts out all the energy expended down the line, from the septic system to the treatment plant. That could be beneficial to our waterways. Take for example the Chesapeake Bay. About 1.5 billion gallons (5.7 billion liters) of wastewater flow into the bay every day from about 500 sewage treatment plants [source: Birdsong]. As a result, much of the water is a dead zone, unable to keep animals and plants alive.

When waste is in water, it pulls all the oxygen out of the water, but when put back into the ground, it has several benefits. Humus can help other plants by providing nutrients, neutralizing toxins in the soil and enhancing microbes that fight off disease [source: Birdsong]. Yet there is concern that harmful pathogens may still be present, so many states require that the finished product be taken to a treatment facility or buried 12 inches (30.5 centimeters) underground [source: Kahn et al.]. This measure keeps the humus away from the edibles in your garden, though some sources do note that if no one that used the toilet was sick, then the compost may be in the clear [source: Kahn et al.]. You can also have your compost tested for pathogens at a local laboratory.

For a self-contained composting toilet to work properly, ventilation is needed that can both keep the smell out of your bathroom while providing enough oxygen for the compost to break down. With some toilets, this is done with fans and a heater powered by electricity (some models do not require electricity). Does this power consumption clog up the environmental friendliness of this toilet?

The composter does have to be kept at a minimum temperature of 65 degrees Fahrenheit (18.3 degrees Celsius), so if you're living off the grid, a heater could potentially require more electricity than you use in the rest of the house [sources: Abazs, Rosenbaum]. The heater doesn't have to run all the time though; one model may only operate at a maximum level of 540 watts for about 6 hours a day [source: Envirolet]. But because self-contained models are small, the power use for fans is fairly minimal. It may range from about 80 to 150 watts [source: LetsGoGreen]. This is the same amount of power used by a light bulb [source: SunMar]. An alternative would be to use solar panels to power the fans and heater.

But don't forget man power when comparing water saved against power used. A U.S. Environmental Protection Agency fact sheet notes that most of the disadvantages associated with composting toilets related to improper maintenance. In many cultures, we aren't used to dealing with our feces after they leave our body, so deciding what level of involvement you want with your waste may tilt the scales in terms of whether this is a green investment you're willing to make. If the composting system isn't adequately managed by someone, this toilet can become environmentally unfriendly very fast.

Don't poop out on us now -- turn the page to learn more about toilets.