How to Build an Outhouse with a Composting Bucket Toilet 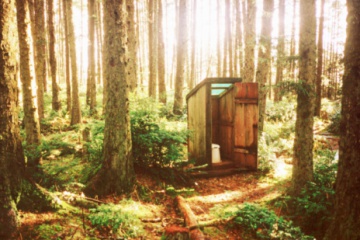 Tired of having trips to the toilet contribute to the wastewater stream? Start composting your own waste into valuable humanure.
Rob D. Casey/Workbook Stock/Getty Images

The sprawling tentacles that constitute the water infrastructure in the United States spill about 860 million gallons (3.3 billion liters) of untreated water -- along with all the raw waste that involves -- each year. If you add in all the clean water lost, that amount soars to about 6 billion gallons (22.7 billion liters)spilled each day [source: Gleick and Ellis-Lamkins]. But while the loss of clean water is a serious waste of a precious natural resource, it's the untreated water that's most troubling. That's because human fecal matter and urine, when not disposed of safely, can cause numerous environmental and health problems in the world's waterways.

Some people, however, are proactive about preventing their personal waste from becoming part of this spewing stream of potential pollution, and treat their bathroom business as a natural process that can produce a beneficial result. That result? Humanure. The idea is to compost human urine and manure and turn it into a useful, reusable byproduct [source: Jenkins]. Whether that byproduct -- a natural fertilizer -- is used to make food-growing soil more fertile is a matter of personal preference. Some say go for it, while other practitioners caution against it, reserving the compost for ornamental planting purposes. But everyone in the pro-poop-composting-camp agrees that it's wasteful if not downright irresponsible to not take these matters seriously.

In fact, those who don't appreciate the process are sometimes referred to as fecophobes by composting aficionados. Fear of, or at least distaste for, feces is a cultural norm in many parts of the world -- especially the Western Hemisphere -- no matter how often children are read "Everybody Poops" as a bedtime story. From the father of biodynamic agriculture, Rudolf Steiner, to the public outreach department of U.S. Department of Agriculture, the message has historically been consistent and adamant: Human waste is a dangerous and potentially deadly substance.

But people who advocate composting human waste say otherwise. While in its raw and original state, yes, it can pose a serious public health risk. But after being composted, humanure devotees claim it's not only safe to use as fertilizer, it's the only way to go to keep the overall environment in a healthy and flourishing state. On the next couple of pages, we'll take a look at how people construct and maintain composting toilets in outhouses.