10 Reasons Soy Candles Are Better for Your Holiday Feast

by Cara Smusiak, Planet Green
Next 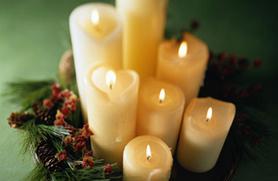 Holiday dinners are usually centered around family, great food, and a gorgeous table glowing with candlelight. Most people set the table with paraffin candles, but they're not really a great option.

Paraffin is made from the residue left over from oil refining. While it is good use of a waste product, it isn't good for your health or the environment. Soot from paraffin candles includes probable carcinogens toluene and benzene, as well as other toxic chemicals including methyl ethyl ketone and naphthalene. Some candles even contain lead in the wick.

When it comes to candlelit dinners, soy is the way to go...

1. Soy burns longer: While soy candles seem to be more expensive, when you factor in the longer burning time, they're pretty comparable to paraffin.

2. Soy doesn't interfere with the aromas of the meal: Paraffin candles release chemicals that can overpower the scent of foods, which is a big part of enjoying food!

3. Soy is sustainable: Unlike paraffin, which is derived from oil, soy is a renewable resource. Try to look for local brands made with soy that has been grown sustainably.

4. Soy is better for your health: Soy burns cleaner and produces as much as 90 percent less soot than paraffin, reducing the amount of indoor air pollution produced over the course of your meal.

5. Soy won't ruin your walls: The emissions from paraffin candles build up on walls, staining the paint in your home. They also build up in upholstery fabrics and in carpets, affecting the air quality in your home.

6. Soy doesn't produce as much heat: When you've had the oven on all day and a bunch of people over, the last thing you need is more heat. 7. Spilled soy is easier to clean up: Soy is biodegradable so if it spills on your tablecloth or clothing, it's a lot easier to clean than paraffin. 8. Soy helps U.S. farmers: The United States is the number one producer of soy in the world, so when you buy soy products, you're supporting American farmers. 9. Soy candles are safer: Soy is a soft wax so tapers are nearly impossible to find. But tapers can tip over easily, so avoid the fire hazard altogether with soy pillar candles. 10. Soy is better than beeswax at mealtime: While beeswax a great option, the honey scent can interfere with your meal--plus soy is cheaper to produce, so you'll save some money.