Can the color of a room affect your mood? 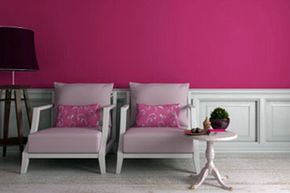 Are you feeling calm yet? Pink can do that to you!
iStockphoto/Thinkstock

For more than three decades, visiting football teams to the University of Iowa's Kinnick Stadium have had to suit up for games in an all-pink locker room. Everything in the space -- the urinals, lockers, walls, even the floors -- is pink. The color scheme is supposed to calm and pacify the Hawkeyes' opponents and is a tradition begun by former coach Hayden Fry, who just happened to be a psychology major. To counteract the color's effects, teams have gone as far as to cover the walls with different colored wallpaper, and more than one defeated opponent has blamed its loss on the room's hue.

But does the Hawkeyes' pink locker room actually give the home team an advantage, or is that just an excuse for sore losers? It's hard to say for certain, but we do know that a room's color can have a profound impact on a person's mood. In fact, many police stations around the country have pink drunk tanks to calm intoxicated prisoners, and a few require inmates to don pink jumpsuits and live in pink cells. One jail in Missouri even added painted blue teddy bears on their pink walls in the hopes of fostering a soothing environment.

Pink isn't the only room color that can evoke an emotional response. As any interior decorator will tell you, how a person feels in a space is largely dependent on the room's color. Of course, there are other variables, including gender, culture, age, personality and mental state, but color affects us more than most of us realize. Tests have even shown that certain colors (red and blue, respectively) can increase memory retention and creativity.

What hue may inspire you (or your husband or child) to keep a tidier home? Find out on the next page.

Certain colors are more comforting than others. Think about it: Would you want to visit the dentist or undergo surgery in a bright red room? Not likely. Most of us tend to spend the majority of our time in rooms with light, peaceful tones. Let's take a look at some colors that can make anyone feel at home.

Yellow is perhaps the most peaceful color out there. It's the color of spring, wealth, sunshine and happiness. Rooms draped in yellow tend to promote optimism, cheerfulness and enthusiasm. This color can work for virtually any room, as long as the tone isn't too bright. A soft, peaceful yellow is only a few hues away from a loud and aggressive gold, so unless you want to think of bumble bees and yield signs every time you walk in the door, stick to tones on the lighter end of the yellow spectrum.

White is the color of peace, innocence, marriage and snow. It's a color that, in modern society, has come to represent cleanliness and sanitation. Outside of their implied sterility, white rooms tend to be comfortable but unemotional spaces. In fact, occupants' attention is usually drawn to the room's furnishings, and as anyone who has accidentally dribbled food onto a white T-shirt can tell you, this color shows everything. White works for any space, but be warned: Cluttered environments appear even more disorderly inside white walls, so they require a bit more attention to keep up. The good news is that your messy 8-year-old or even messier husband may choose pick up his toys and belongings every once in a while in a white environment.

As the color of the ocean and the sky, blue represents harmony, tranquility and reliability. Blue rooms can have a positive effect on creativity, and the calming effects of the color tend to ease moods and even lower heart rates. It doesn't matter if you're at work, in the bedroom or in the bathroom -- any space can look great and promote a sense of relaxation if it's a peaceful, calm shade of blue.

The word itself has come to symbolize nature, so it's not surprising that green rooms tend to evoke feelings of rejuvenation and freshness. Green symbolizes good health, but many people find that certain shades of the color make them feel ill, so it's not the best choice for kitchens and bathrooms. Bedrooms, living rooms and hallways go great in green, as long as it's a clean shade. Think turtles and treetops, not snot or swamps.

There are ranges to every color, and a shade turned up to its brightest hue is sure to evoke a more stimulated response than the same color in a muted, subdued tone. 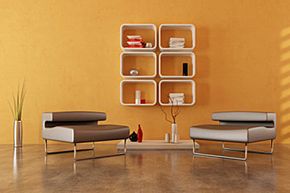 The vibrancy of an orange hue can create an inviting feeling.
iStockphoto/Thinkstock

Warm and comforting is great for napping and nurseries, but no one wants to party in a baby blue (or pink) room. Some spaces require more oomph, so if you're looking to add a sense of vibrancy to your environment, take a look at these colors.

Red is a loud, bright color that stands out. It's the color of stop signs, fire engines and blood, so most of us see it and immediately stop to take notice. Red reminds us of both danger and love and is such a noticeable, aggressive color it can even elicit an increased heart rate in some people. This color is a bold choice for any room, and it works well in active spaces where visitors are hosted, such as living rooms and converted basements. Surprisingly, it also has been shown to heighten worker productivity and memory retention in office environments, but only in people who are both driven and focused. Those who are easily distracted tend to become more befuddled in red rooms, so think about your employees' or co-workers' personalities before you volunteer to repaint your workplace.

Orange is the color of pumpkins, falling leaves and Halloween, and it expresses energy and friendliness. This is definitely a stop-and-take-notice kind of color, but it's not as jarring or intrusive as red, so it works in a greater variety of spaces. The welcoming nature of orange makes it a distinctive choice for rooms that should be inviting. Kitchens, living rooms, bathrooms and play areas make good orange spaces, but the color isn't without its detractors. Many people simply dislike the combination of yellow and red, so don't paint a room with the expectation that everyone will approve of your color choice.

Think of purple as blue's loud cousin. Purple has long been the tone of royalty and is perhaps the most exotic of colors. It promotes a sense of wisdom, quality and spirituality. Purple can be both brash and soothing, and it goes well in any room where you'd like to make a statement, from the bedroom to the laundry room. Just don't overdo it. Too much purple, or too vibrant a hue, is generally considered to be tacky, not cool.

Not surprisingly, black rooms tend to feel small and claustrophobic (black is defined as the absence of light, after all). It's a demanding, authoritative color that, if it's all-encompassing, tends to visually diminish the dimensions of a space. Black can make an artistic statement on a wall or two, but unless you're a boss who does a lot more firing than hiring, we don't recommend completely covering any space in the color. Any bright shade that stands out can make a striking accent color against a black background, but red, yellow and white work particularly well. 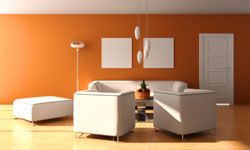