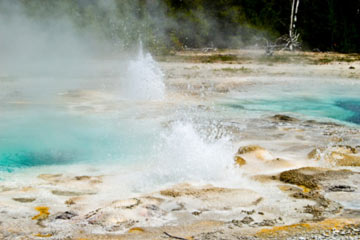 Earth brims with a limitless source of geothermal energy.
iStockphoto/Thinkstock

In 2009, residents of Mount Airy, Md., might have noticed some strange goings on in the backyard of Mike Dixon's South Main Street home. Dixon was drilling holes. One over here, another over there. Dixon wasn't looking for buried treasure. He wasn't drilling for water.

Instead, Dixon was drilling the holes to install a geothermal heating and cooling system [source: Cochrun].

Dixon dug two holes 450 feet (137.16 meters) deep. When he finished, Dixon installed polyethylene pipes in the ground. He connected those pipes to a special unit that could heat his house in the winter and cool it in the summer. The source of all this power is Earth itself [source: Cochrun].

Earth brims with a limitless source of energy. It's called geothermal from the Greek words geo, or "earth," and therme, or "heat."

Deep inside the planet is a lot of hot water and steam -- the deeper you go, the hotter it gets. In fact Earth's core is so hot that it can melt rock, which is known as magma. Some magma escapes through cracks in Earth's crust. However, most magma stays beneath the surface, heating pools of water. Most of that hot water sits below ground in geothermal reservoirs. Sometimes that hot water comes to the surface and pools in hot springs, or erupts as geysers.

People have known the benefits of geothermal energy for centuries. The ancient Romans used hot springs to heat homes. In 1892, Boise, Idaho began using water from a nearby hot spring to heat some of that city's buildings. Today, Boise has the largest geothermal direct-use system in the United States, providing heat to more than 55 downtown businesses [source: City of Boise].

Unlike oil and other fossil fuels, geothermal energy is renewable. It's clean, abundant, and once you make the initial investment of setting up a system -- it's cheap. Dixon says his geothermal system cost nearly $40,000 to install. But in Dixon's view, the government tax breaks and the prospect of lower energy bills made geothermal energy a no-brainer [source: Cochrun].

Are geothermal heating and cooling systems really better for the environment? Which system uses less energy and can save you money? Click to the next page to find out. 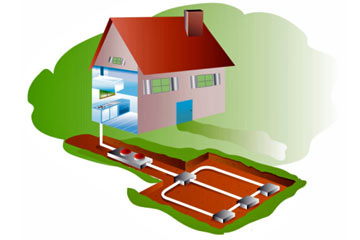 A geo-exchange system taps into the Earth's energy to heat and cool a home.
Hemera/Thinkstock

Sue Butler had had enough of high energy bills. When her old gas furnace went on the fritz, Butler, of Cambridge, Mass., decided to go green -- geothermal green. She began using heat from the Earth to cool and heat her home [source: LaMonica].

How do geothermal systems work? When the seasons change, temperatures fluctuate. But the temperature below the ground stays the same. Only a few feet below the surface, the temperature of the water remains the same, generally around 42 to 80 degrees Fahrenheit (5.56 to 26.67 degrees Celsius) year round, depending on where you live. A geo-exchange system can use this energy to heat and cool almost any kind of building [source: Minnesota Geothermal Solutions].

Geothermal systems do not directly tap into heat inside the Earth. Instead, homes and buildings use geothermal heat pumps to exploit the constant temperature of geothermal wells under the ground. These heat pumps are placed on the inside or outside of a building [source: LaMonica]. The heat pump, which runs on electricity, is a simple device that moves heat from below ground into a home. The heat pump can cool a house in the summer, and warm it during the winter [source: APH Geothermal].

Most geothermal systems are built as closed loop systems. In a closed loop system, a series of underground pipes are filled with a refrigerant, a fluid that absorbs heat from the warm water. When it is cold outside, the fluid absorbs Earth's heat and brings it inside to warm the air. In the summertime, the heat exchange works in reverse, cooling the house [source: LaMonica].

Open loop systems use well or pond water instead of a refrigerant. The heat pump takes the heat out of the water and uses it to warm or cool a house. The water is then pumped back into its original source [source: Alliant Energy].

Geothermal heating and cooling systems are very green, which means they are much better for the environment than conventional systems. For example, geothermal systems generate less greenhouse gases than traditional heating and cooling systems. The systems eliminate more than 3 million tons of carbon dioxide from the atmosphere each year. That's like taking 650,000 automobiles off the road [source: Oklahoma State University].

For every kilowatt of electricity a geothermal system consumes, it delivers three to six kilowatts of energy to heat or cool a building [source: Open Energy]. Geothermal heating systems are 70 percent more efficient than conventional oil or gas heating systems [source: U.S. Department of Energy].

When it comes to the environment, both geothermal heating and cooling systems are far superior in minimizing greenhouse gas emissions. Geothermal energy homeowners can save 70 percent on a home heating bill and 50 percent on cooling bill [source: Fanjoy].

Geothermal heat pumps use 25 percent to 50 percent less electricity than traditional heating or cooling systems. For every one unit of electricity a heat pump uses, it can move three units of heat from below ground. Geothermal heat pumps can also reduce energy consumption and greenhouse gas emissions up to 72 percent compared to standard air-conditioning equipment [source: U.S. Department of Energy].