Is nanotechnology changing the face of the construction industry? 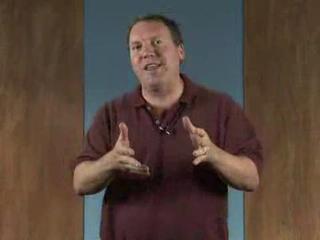 When you hear the word "nanotechnology," what springs to mind? Tiny robots that look like bugs? A world overrun with gray goo? Futuristic visions of microscopic creations swimming through your bloodstream to scan for infection? While most of us have heard about the diminutive science of nanotechnology, it's not always clear what all this small stuff is about.

The first confusing thing about nanotechnology is that it's not a particular school of science. It refers to any of the sciences, when performed on a given scale. In practice, the prefix "nano" refers to a size of materials at which regular laws of physics break down and quantum effects (or nanoeffects) take over: Gravity is less important, and electromagnetic energy works differently.

If that sounds crazy, think about it this way: A nanometer is one billionth of a meter, and the effects of gravity and electromagnetism become relatively insignificant when dealing with anything less than one hundred nanometers in size. At that scale, the differences from the world we know are so drastic, they're almost unimaginable.

Nanotechnology is now being applied to construction materials. It's a relatively new science, but one that's already impacting the manufacture of building materials you're familiar with: glass, steel, concrete, coatings and even wood. Mixing nanotech particles with these materials produces an array of beneficial effects.

From making concrete and glass that's fire-protective, to giving strength to wood and steel at much lower densities, and even making our glass and cement self-cleaning, nanotechnology is helping us build a safer, cleaner and more efficient world.

The Building Materials of Nanotech

For a concrete example (forgive the pun) of nanotechnology at work, take titanium dioxide (TiO2). It's a white pigment that's long been used in concrete and glass coatings for a variety of purposes, which qualify its use as nanotechnology. TiO2 absorbs UV rays, keeping concrete clean and white. TiO2 also corrals and breaks down particulate matter in the air -- including particles that make up pollution -- so mixing it into tarmac means the road itself helps clean the environment. TiO2 is also used in a variety of home building products to help keep things sterile by consuming bacteria. It can even be used to create defogging and self-cleaning glass, through a nanoeffect in which the absorption of UV light makes the glass attractive to water: Moisture collects, sheets up and slides away, removing dirt and leaving a strong, clean surface behind.

Other kinds of nanoparticles -- which are particles that we mix with other materials, or use on their own, and are defined by being smaller than 200 nanometers in at least one dimension -- include carbon nanotubes, which are self-assembling structures that use the unique crystallizing properties of carbon to form incredibly strong materials. First discovered in Russia in 1952 and then ignored until the 1990s, carbon nanotubes have one-sixth the density of steel, but can be from eight to 100 times stronger [source: Kurzweil]. 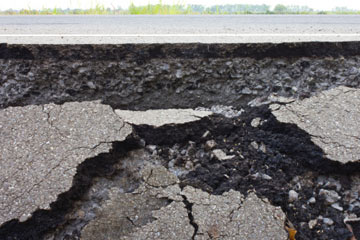 One of the hopes of nanotechnology researchers is to develop construction materials to make the roads of the future able to self-repair. No more potholes!
©iStockphoto/Thinkstock

Another subset of nanoparticles, called quantum dots, combines the tiny quantum power of nanotech with the ability to conduct electricity. The myriad of potential applications for these little guys is almost unimaginable, but early applications include "smart aggregate," a kind of road concrete that can actually report on where it's weakening or broken. By analyzing the low-level electrical field of a structure -- such as a road -- embedded with these tiny guys, you can get a readout on its status; it's not unlike the screen of an old-fashioned calculator. Because nanoparticles naturally align themselves to one another based on their chemical and thermodynamic properties, scientists can manipulate those properties to create roads or buildings made of smart aggregate that can actually repair itself.

Or there's nano-silica, an artificial silicate (SiO2, a classic building material) that, when mixed into concrete, uses the quantum attraction between its particles to increase strength by three to six times without increasing concrete's density. It's like a net of quantum energy, keeping everything bound together. SiO2 is also a useful ingredient or coating for glass or concrete that needs fireproofing -- when heated, it realigns its particles into a much more rigid, fire-retardant structure.

The Future of Nanotech and Construction

Because many nanotech particles naturally align themselves in a way that appears as though they're self-assembling, and because these particles consist of the same basic ingredients as the materials they're beefing up, these seemingly futuristic additives can remove a lot of the labor and environmental costs from the creation of industrial products. A great deal of the environmental impact of concrete production, for example, involves pounding large rocks into precisely-measured smaller sizes for different jobs. But when you're starting with tiny particles that increase strength without adding density, you remove a lot of that energy and time spent -- which means concrete factories can do a smarter, cleaner job.

And since a lot of these materials are more durable once they're out in the world -- some even help reverse pollution damage -- they contribute to sustainability even after they're sold and used in construction projects. Because the quantum effects of many of these materials have been studied and well-document, and because they've been safely used and improved since the 1990s, scientists are able to more perfectly calibrate the best uses and mixtures of materials manipulated with nanotechnology for a much more environmentally intelligent building process.

But the construction industry is, after all, one of the oldest professions, and works with the most timeless materials available -- stone and wood -- with regular success. Very little of the construction industry, globally, is concerned with research and development into nanotechnology. After all, construction is needed everywhere, and they've been doing a fine job since the beginning of human civilization with what they have.

As with any green or industry-changing development, the use of nanotech is a slow but steady race. But change does tend to speed up over time, and with the push toward cheaper and greener global building strategies, odds are good that we'll eventually see the integration of nanotechnology in consturction expand significantly within the next decade.

In the meantime, don't be surprised if, on your next visit to the home improvement center, you see some of these applications used in products you thought you're already familiar with. The future doesn't come in a brightly labeled box marked THE FUTURE. It shows up after being test-marketed, designed, renamed and made to look like the world we already know -- but that doesn't make it any less exciting.

As someone with a long-standing interest in green building and modern architecture, I was excited at the opportunity to learn more about these particular applications for nanotechnology. There is so much that nanotech offers us, from biomedicine to transportation, that a development in any one field helps contribute to the overall science, which means it leads toward benefits for us all.

What's a technology library?
Why isn't green construction required by law?
Why is concrete fire resistant?