At the end of the 19th century, settlers in the Sandhills area of northwestern Nebraska faced a problem. The Sandhills, a vast area of grass-covered sand dunes, provided no lumber for building. There were no nearby railroad depots to bring in building supplies. The little good sod that was present was better used for crops that fed livestock. 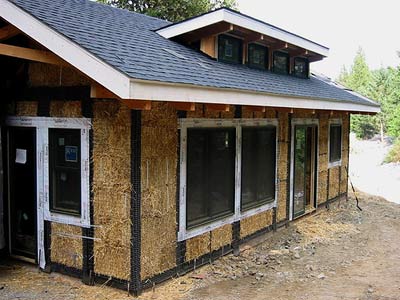 Maybe one of the settlers was familiar with the New England method of using stacked hay bales to insulate blocks of ice. Maybe someone was inspired by the big bundles of straw produced by the recently invented mechanical baler. At some point in the late 1890s, the settlers started building houses, schools and churches out of straw bales. Piling one bale on top of another, they built square or rectangular one-story dwellings covered by a simple, sloped roof.

Those first buildings were not meant to be permanent. Many weren't. One of the oldest recorded straw bale buildings was a one-room schoolhouse built in 1896 or 1897. Cows ate the school in 1902 because the walls weren't plastered. However, once the settlers started to apply plaster to the walls, they found that these temporary houses could keep them cool in the summer and warm in the winter. The homes could withstand the high winds of the Nebraska prairie, and they were quiet as well. Historians investigating the Sandhills homes spoke with one woman who recalled her parents playing cards in their straw bale house, oblivious to the tornado raging outside [source: Hammett].

Building homes with straw bales died out in Nebraska around World War II as cement became popular. These days, we're more likely to think of the story of the little pig who threw some straw together and called it a house, only to have the big, bad wolf huff and puff and blow the structure down. However, if the pig had had access to a baler and some plaster, he would have had a sturdy home.

A straw bale house uses straw bales as insulation or as the structural building block of the home. The walls are finished with plaster. This kind of construction is gaining attention as a natural building method. In 2001, a British firm estimated that about 1,000 new straw bale structures were being built each year around the world [source: Amazon Nails].

What's causing this interest in straw bale houses? What benefits do they provide? Doesn't it seem a little dangerous to live in a house built with blocks of straw? We'll look at the benefits of straw bale building on the next page.