Reaping the benefits of a straw bale house involves more than just stacking straw willy-nilly. The home should be designed so that nature aids energy efficiency. Before building, figure out where the sun goes, how the wind blows or if there's water nearby. Where does the rain go when it falls? Think about how trees, shrubs and other natural barriers could block the wind or a heavy sun. These factors will determine how to best orient the house and design features such as windows. 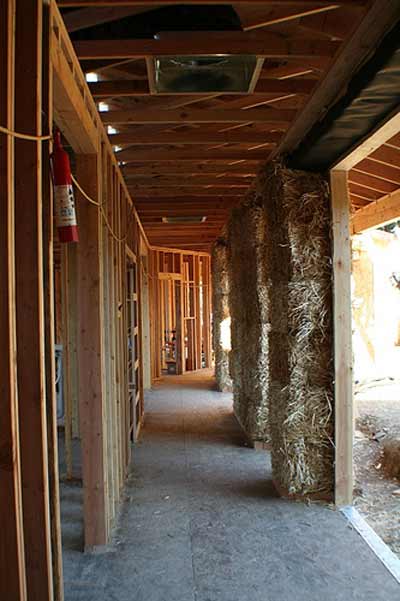 There are two main ways to construct a straw bale home. The first technique is post-and-beam infill. In a post-and-beam design, the skeleton of the house is made up by a frame that supports the roof, while the straw bales are filled in as insulation. This method is usually more acceptable to building officials, lenders and insurers because it's closer to a standard form of construction.

The second method of straw bale house construction is load-bearing, also known as Nebraska-style, because it was employed by the first straw bale builders in the Sandhills. In this method, there are no beams, and the bales support the roof. The width and density of the bales make them inherently sturdy, and some people prefer this frameless method because it requires less construction skill and uses fewer resources. However, it does come with some design limitations. For one, homes can only be one story high, although with creative engineering, you can manage a loft. The length of the walls is limited; according to building ratios, you cannot have more than 25 feet of unsupported wall in any direction. Finally, windows and doors are limited to 50 percent of the wall surface area [source: Morrison], but double-check these numbers with local building codes and be sure to determine if one of these construction methods is required for your area.

­Selecting straw is an important design factor. Straw bales come in all shapes and sizes, but the most common building blocks are two-string bales and three-string bales, so named because two or three lengths of wire or twine tie them together. According to the U.S. Department of Energy, they have the following measurements:

You can plug in your dimensions to an online bale calculator to figure out how many bales you'll need for building. An example of a calculator may be found at Harvest Homes.

You can buy bales at feed stores or directly from a farmer. It's important to select dry bales. Hand-held moisture meters can check the bale's moisture content; moisture content of up to 20 percent is considered safe [source: Morrison]. Look for bales with a golden color because lighter straw indicates less moisture. Bales also should be tightly strung, so that when you lift or drop the bale, it generally keeps its shape.