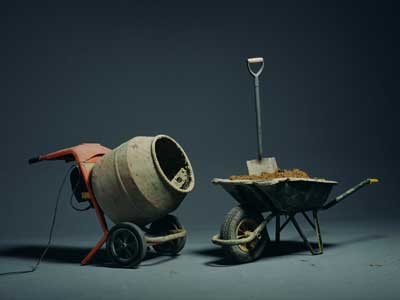 Concrete mixers, shovels and wheelbarrows aren’t complicated, but the right mixture is essential to any project.
Alex and Laila/Stone+/­Getty Images

­When you get right down to it, concrete is a mixture of two components: aggregates and paste. In primitive brick construction, straw served as the aggregate and mud served as the paste. Once the mud had hardened, the embedded straw strengthened the structure of the brick.

In modern concrete, a variety of materials help make up aggregates, including sand and various sizes of gravel and crushed stone. Aggregates are divided into two categories based on particle size: fine aggregate, which is 0.2 inches (5 millimeters) or smaller, and coarse aggregate as large as 1.5 inches (38.1 millimeters). Concrete makers have even found ways to reuse such items as oyster shells and even waste ash from coal-fired power plants.

Cement serves as the paste in modern concrete. Dry cement mixes contain a host of different materials that typically include limestone, clay, gypsum, and various other chemicals and minerals. After the materials have been crushed, mixed in appropriate proportions, burned and ground, the resulting mixture is ready to be combined with water. When this occurs, a chemical process called hydration takes place, and the resulting paste dries into a solid stonelike mass. Portland cement is the most common variety of cement and is typically used in concrete production.

Supplementary cementitious materials (SCM) such as pozzolans (such as power-plant ash) and slag (a byproduct of iron smelting) are sometimes added to the cement mixture as well. Pozzolans are materials that exhibit cementlike properties when combined with lime.

When it comes to ensuring proper proportions, making concrete is a lot like baking. Mess up the contents of the mixing bowl, and you're likely to have a disaster of a cake on your hands. Likewise, cement, water and aggregate measurements have a huge influence on concrete's strength, permeability and durability. The amount of water used can also influence how well concrete bonds with reinforcement and how much shrinking and cracking take place during drying.

Additional ingredients, called admixtures, further complicate the process. An admixture's effect depends greatly on the other proportions in the concrete but, if added during mixing, they can serve as a kind of power-up for the concrete. Some admixtures affect color, hydration time or shrinkage rate, while others provide such benefits as minimized corrosion for steel beams inside the concrete block.

Once the best ingredient proportions have been determined for a given job, it's time to mix it up and pour a few slabs.