Why do drywall screws pop out? 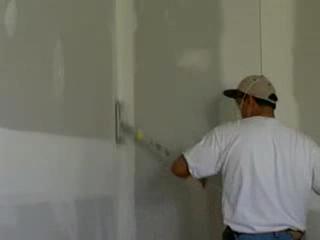 Due to shrinking of the wooden studs that are behind the drywall or warping of the wooden frame, nails and screws that were driven into the drywall can become loose and pop out. You can tell if you have a screw popping out either because you see a bump on your wall around the size of a quarter or because you actually see the screw head sticking out of the wall. No one likes to stare at bumps or holes in their walls, so gather up a screwdriver (electric or manual), screws, putty knife, spackling compound, fine sandpaper and paint to fix the problem.

First, try to drive the screw further in with a screwdriver. If the head of the screw just rotates without entering deeper into the wood, it could be that the head has separated from the rest of the screw. In that case, carefully dig the head out. Regardless of whether you drive the nail in further or take out the head, you'll want to remove some of the pressure on the screw by putting in another screw an inch or two above the first one and a third screw an inch or two below it. Use the putty knife and spackling compound to fill in the holes and let them dry for two to four hours. Sand off the excess and check if you'll need another coat of spackling compound, as it tends to sink in as it dries. If you do, put on another coat, let it dry, sand again, and paint (don't be surprised if you need two coats of paint).

Although screws may occasionally pop out of drywall, they do so less frequently than nails; if you have a choice, put up your drywall with screws to begin with and you'll have less to repair later on.