How to Keep Your Bathroom Smelling Fresh 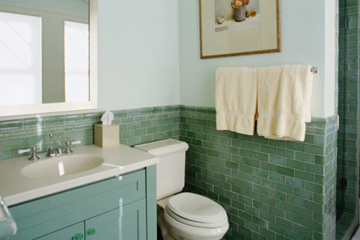 Even if your bathroom is spotless, there may be odors lurking beneath the surface.
Comstock/Thinkstock

Where the bathroom is concerned, the sweet smell of cleaning success -- is no smell at all. That can be a challenge, though. Bathrooms are ground zero for some of the dirtiest and most pungently odiferous activities in your home.

When you think about it, there are actually two basic types of bathroom odors. First, there are the obvious, unavoidable culprits that come from using the facilities for their intended purpose, but there are also some more subtle contenders that can develop in moist and germy places. The solution is to approach bathroom cleaning and deodorizing from two different angles: Minimize the impact of unavoidable odors, and make every effort to keep controllable odors from developing in the first place.

For unavoidable odors, you may already know about the impact of striking a match in a stinky bathroom. It almost completely masks the organic smell -- temporarily, anyway. There's actually some debate about how a match strike can combat odor. It may be the result of the interaction of sulfur dioxide with the human olfactory sense. The organic smell just can't compete. It could also be that the release of activated carbon in the combustion process neutralizes the sulfur in the air. Regardless of the science involved, keep a box of matches and an ashtray in your bathroom to encourage adult family members and visitors to use this old-timey air-freshening tactic. Some folks think it works better than most conventional air fresheners -- and you can't beat it for economy.

If you think striking a match is a bit too antiquated an option for you, odor neutralizing products like Courtesy Flush and Just a Drop are point-of-use personal deodorizers that claim to work as well as matches. If you think your family or friends will use them, keeping a bottle on hand might be a good idea. The principle is pretty simple: Adding a drop of deodorizer to the toilet prior to using the facilities eliminates odor before it has a chance to spread. Point-of-use odor neutralizers are considered personal care products, so carrying a small bottle with you when you're out and about could help you avoid potential embarrassment when you visit a location with poor ventilation, too. Your hostess will thank you for your consideration.

The unavoidable odors caused by toilet use aren't the only smells that can create problems in the bathroom. Bathrooms are often steamy and usually a little damp -- a great environment for mold, mildew and all manner of bacteria. The best way to the avoid odors and health hazards these threats represent is to keep your bathroom as clean as possible. Your best bet is to adopt a regular bathroom cleaning routine. These tips will help: