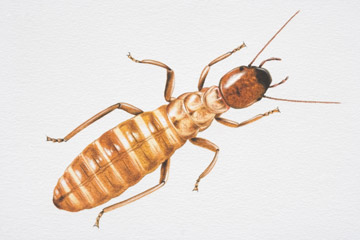 This tiny little critter may look harmless, but it could destroy your house.
Dorling Kindersley/Getty Images

Termites are a common insect, known by many names, including "white ants" or the "silent destroyers." Whatever you call them, these hungry little insects are capable of causing a lot of damage if they get into your home's foundation, windows, or doors.

The termite's closest relative is another common household pest: the cockroach. They live in colonies, like bees and ants, with an equal number of males and females. Termites have been around for 250 million years, and almost 2,750 species have been identified, most of them native to tropical rainforests [source: Encyclopedia Britannica].

Some species of termites have been relocated to parts of the world far away from their native land as stowaways on ships, hidden in the wood of crates, lumber, furniture -- even in the structure of the boats themselves.

There's good news about termites ... and then there's bad news. As an important part of the ecosystem, they feed on dead plants and trees, including wood and plant matter in the soil. On the beneficial side, their voracious feeding habits help convert plant cellulose into substances that help support new growth. They measure only around a centimeter in length, but their mouths are capable of tearing off big chunks of food.

On the other hand, termites can cause costly damage to wooden structures and crops. Interestingly, termites that aren't native species to an area can cause the most damage; away from their natural element, they seek shelter in man-made buildings, causing tremendous damage to houses and furniture. As an example, consider the Formosan subterranean termite: It's native to China and is the most destructive termite species in the United States [source: Termites 101].

Subterranean termites like the Formosan require food, moisture, shelter, and optimal temperatures to survive -- and the conditions around your house may fit the bill nicely. They usually find their way into a home through its foundation. Once inside, they can wreak havoc on the framework of your home, along with any wood flooring, cabinetry, doorways, windows, even furniture. Dampwood termites live in heavily forested areas because they prefer wet wood. Drywood termites, more rare in the United States, live in the wood they consume and sometimes infest walls and furniture.

How do you know if your house is infested? A temporary swarm of winged insects inside the house or emerging from the soil around your house is one sign. Swarms are most likely to occur in the springtime, when newly mature termites are drawn to the light, ready to find a mate and look for a place to start a new colony. Other signs that you have termites-in-residence include cracked or bubbling paint, mud tubes on exterior walls, beams or crawl spaces, or signs of termite droppings. You can also tap on any wood that you suspect is infected: It will sound hollow.

To prevent termites from invading your home, keep moisture problems at bay, monitor areas where wood touches moist soil, and move possible food sources like woodpiles away from the house. It's wise to schedule a regular termite treatment plan that may include inspection and treatment to prevent any problems from occurring.

How can copper keep termites at bay?
How do I know if termites are eating my house?
Keeping Termites Away From Your Home