How to Install a Home Security System 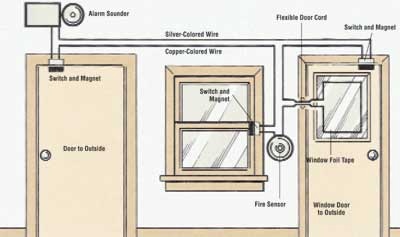 Because all switches in this closed-circuit system are in a wiring loop, opening any one of them breaks the loop and triggers the bell-ringing circuit.

Installation involves mounting the sound source or sounder in a location where it can be easily heard. Then attach a circuit of switches to the sounder and connect a battery to the system. Since the sounder operates from the battery, it remains an effective alarm system even in the event of a power failure. Alternately, battery-operated remote wireless sensors and controls can be installed. However, make sure that batteries are replaced regularly.

In electrical terminology, this alarm system is called a closed-circuit system. When the doors and windows are shut, the attached switches are closed. Because all the switches are in a wiring loop, opening any one of them breaks the loop and triggers the sounder circuit. Simply closing the door or window, moreover, does not restore the switch loop circuit continuity and does not stop the sound until either the battery becomes exhausted or someone switches off the circuit from battery to sounder.

There is an electronic switch built into the sounder. This switch is turned on by breaking the magnetic-switch loop. A key-operated switch in the sounder circuit allows you to turn the alarm system completely off when it is not needed. Also, once the alarm goes on, operating the key switch is the only way to silence the sounder. Only someone who has a key to the switch can reset the system.

This closed-circuit system is connected to a key switch, alarm bell, and batteries.

The three electronic parts that comprise the solid-state switch of the alarm sounder are mounted on a circuit board. Under the circuit board are a solenoid coil and a plunger that strikes the bell or activates the electronic sounder. Below the coil is a set of breaker points that causes the plunger to vibrate up and down, activating the sound source.

Install the sounder first. Decide where you want it located -- either to attract the most attention for help or to scare away an intruder. If you decide to mount the sounder outdoors, you must drill a hole through the wall for the wires. To shield the sounder from the weather, you should install it in a protective metal box of the type made especially for alarm sounders. Inside the box is a bracket for mounting a tamper switch that sets off the alarm system if someone tries to open the alarm sounder box. Located in the side of the box is the key switch that allows a person with a key (but no one else) to activate, service, reset, or deactivate the alarm system.

If you want the sounder to be located indoors, you need not install it in a protective metal box. Mount the sounder on the wall in a place where it can be heard easily. Placing an indoor sounder in a closet or other confined space is not recommended.

Next, install the door and window switches. The magnet part goes on the door or window, while the switch part goes on the window frame or doorjamb. Use the mounting screws in the kit to attach the parts. Try to position the two parts of the switch so that they are close together -- almost touching -- when the window or door is closed, and widely separated when the door or window starts to open.

Since that is more than the air temperature is ever likely to reach normally -- except in attics, furnace rooms, or over wood or coal stoves or other high-heat producers -- you will never experience false alarms during hot weather. Install 190 degrees Farenheit sensors in normally hot locations. You should mount the fire sensor switches in the spots where you feel they will be most effective. There is no reason why you cannot put one or more sensor in every room that is being wired for the security system.

Consider using current-conducting window foil tape for additional security. Silver foil with a self-adhesive backing is probably available where you purchase your alarm system. It is designed to trigger the alarm if an intruder breaks the glass in a door or a window. During installation, make sure there are no breaks in the foil that you stick on the glass; the tape must be continuous. Self-adhesive foil terminals or connectors at the ends of the foil tapes let you connect the loop circuit wiring, and a flexible door cord allows you to open a foil-taped door or window without setting off the alarm system.

In the next section, let's consider how to wire all of these components together.

How to Wire the System 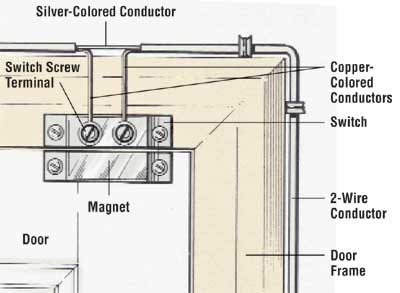 ©2006 Publications International, Ltd. To connect a switch, cut apart the copper-colored wire only and bare the ends. The ends are connected to the terminal screws of the magnet switch.

Once you have mounted the sounder backplate and installed all the switches, fire sensors, and window foil, it is time to wire the system together. The wire for the entry-detection switch loop is a thin (nearly transparent) two-wire cord that is quite inconspicuous when you run it up the corner of a wall, down a door frame, or along the baseboard.

Start at the point farthest away from the sounder (the foil taped to a window or door glass, for example). Using a knife or wire stripper, bare about 3/4 inch of the wire ends. Loop each wire under a separate terminal screw on the switch or door cord. Without cutting the two-wire cord, route it to the next device -- a magnet switch, for example. Use small staples to keep the wire runs neat, but be careful not to damage the wire when you hammer in the staples. At the second device, use a knife to split apart the side-by-side conductors for a distance of a few inches. Cut apart the copper-colored wire only -- do not cut apart both wires. Bare about 3/4 inch of the copper wire ends and connect them to the switch's terminal screws.

Continue in this manner to the next switch, cutting apart only the copper-colored wire in the cord and attaching the bared ends of the cut wire under the terminal screws on the switch. One after the other, run the wire to all the entry-detection switches and fire sensors, finally running the two-wire cord to the sounder backplate location.

If you need more than the spool of wire included in security system kits, buy another spool of the same wire gauge and start the new length at the last switch reached by the first length of wire. Cut off what remains of the first length of wire at the switch, and bare the two conductors in both wires. Attach the copper-colored wires to the switch terminal screws. Twist together the two silver-colored wires, and affix a small, solderless connector. Continue the run back to the sounder with the new spool of wire, but do not connect the wire to the sounder yet.

You have just finished wiring the intruder-entry sensor switch loop. If you did it properly, the circuit of the copper-colored wire will go to and through all the switches, and the silver-colored wire will return from the farthest end with no breaks or interruptions.

Now it is time to install the battery circuit. Purchase two 6-volt lantern-type batteries or a suitable type of rechargeable battery pack. Decide where you are going to locate the batteries; they can be hidden in a closet or a cabinet or placed on a shelf you can install for that purpose. The security system kit should contain some lengths of single-conductor wire called bell wire. One should be covered with red insulation and the other with black. Use this wire for connecting the batteries to the sounder.

Connect the wire ends from the switch loop to the two smaller wires on the sounder. Fasten the sounder to its backplate, and tighten the attachment screw. Finally, with the key switch in the OFF position, attach the short wire between the two battery cells.

If the alarm sounds as soon as you turn the key switch on, check the loop circuit to make sure it is intact. All switches must be closed, all wires have to be attached properly to switches under terminal screws, and no break can exist in the window foil. On the other hand, if the alarm does not sound when you open the door, check to make sure that the key is on and that the wiring from the battery to the sounder is correct.

Once you get the system into operation, set it off deliberately about once a week just to make certain that the circuit is still in working condition and that the batteries still contain enough power to operate the system properly. Test the system only briefly; then turn it off and reset it.

You can usually leave the security system turned on in the sentry mode for a considerable period of time. Since the entry-detection switch circuit draws a standby current of only about one-thousandth of an ampere, the batteries should last for months when used only to supply the entry-detection switch loop. Using the sounder puts a heavy drain on the batteries. After the alarm has sounded for a few hours, the batteries become exhausted and the alarm stops sounding. Know how much use your batteries can stand, and replace or recharge them before their energy is depleted.

Security systems are complex, but when trouble arises, you can pinpoint the culprit by following these guidelines. Click here for a printable chart.

How long does paint emit VOCs into the air?
How Fire Sprinkler Systems Work
What lock-picking tools do you need to pick a lock?