How much water do waterless urinals really save? 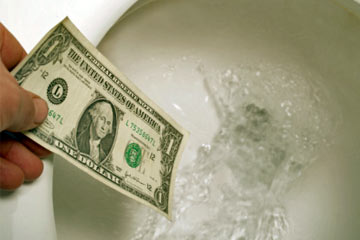 Green Living Image Gallery You flush cash and H2O down the drain each time you use a traditional urinal. See more green living pictures.
iStockphoto/Thinkstock

Waterless urinal. These two words might bring to mind an embarrassing problem that requires the help of a plumber before things in the bathroom get, well, worse. But actually, a waterless urinal is a type of urinal that is becoming more popular, especially as more and more businesses, public facilities and individuals look for ways to cut their budgets, go "green" or both. But exactly how much water can they save? We'll discuss that later, but first let's explain how they work.

The concept behind waterless urinals is surprisingly simple. The design of the bowl prevents urine from pooling and gathering. Instead, it flows down through small holes or a grating at the bottom of the bowl into a small reservoir called a trap. Inside this reservoir, the waste flows through a barrier of sealant, an oil-like liquid lighter than water that traps odors and prevents the urine from being exposed to air. Once underneath the sealant, the urine rests in a cylindrical well around a raised section of exposed pipe leading to the drainage line for the bathroom [source: Waterless]. (In some models, the drain line is off to one side.) Picture a straw puncturing the bottom of a paper cup.

As the waste rises higher than the top of the open drain pipe, the excess trickles down the drain. As more men use the urinal, the urine in the well continually flows out through the pipe as new urine displaces it. The urinals are designed in such a way that the flow of urine is continuous from the point it enters the trap until it enters the drain. This allows the waste to drain naturally, without needing to be forced out like a traditional urinal [source: Waterless].

Waterless urinals were actually invented back in the 1990s, but the recent push toward green construction has made them a more viable, commonplace option, not just a curiosity [source: Davis]. And the conservation potential of these somewhat odd urinals can be huge. Read on to find out just how much water they can save.

H2O by the Numbers

The easy answer to the question of how much water waterless urinals save is, well, all of it. They really do operate without water. The only water needed is a small amount (about 32 ounces, or roughly 1 liter) used to flush the drain line every few months as part of regular maintenance [source: Zero Flush]. Determining exactly how much water a waterless urinal saves can be complicated, though. That number depends on a lot of variables, including the amount of water the old urinal used, the number of people who will use the new urinal and how often those people will use it.

Exactly how much water you save depends on what type of urinal you're replacing. The average toilet uses anywhere from 1 to 3 gallons (3.7 to 11.3 liters) of water for each flush (a number abbreviated as gpf, for gallons per flush) [source: Reichardt]. Newer toilets tend to use less, and older toilets tend to use more, since water efficiency has become a bigger focus in construction in the last few decades. A single urinal can use anywhere from 20,000 (for a 1 gpf urinal) to 45,000 (for 3 gpf) gallons (or about 75,000 to 170,000 liters) of water each year [source: Waterless]. That estimate is based on a building with a few dozen male employees each using the urinal three times a day.

A larger building with one bathroom, three urinals and 120 male employees, could save approximately 237,000 gallons (or about 900,000 liters) of water each year [source: Waterless]. All of that water would be saved if waterless urinals were installed. In a household setting, the conservation would be much less, closer to 3,250 gallons (12,302 liters) per year [source: Wilson]. The more water a building uses in its urinals, the more it can save by switching.

All that water costs money. Depending on the level of use, and the metered rates for local municipal water service, waterless urinals typically pay for themselves in water bill savings alone in the first one to three years [source: Stumpf]. The cost is relatively low, starting between $250 and $500 per urinal [source: Reichardt]. Of course, like anything else, there are expensive designer varieties available at higher prices.

Over the life of a waterless urinal, maintenance costs are also low, since they are less prone to malfunction [source: Stumpf]. There are some regular upkeep costs, however, like the cost of replenishing sealant and replacing the removable cartridges that serve as traps. Sealant needs to be refilled every three to six months, and costs about $60 a gallon [source: Reichardt]. The cartridges are often recyclable, and need to be replaced two to four times a year, at a cost of about $25 a pop [source: Reichardt]. Not all brands of waterless urinals need removable cartridges, though.

Of course, from small households to huge public buildings, urinals have one obvious limitation: They can only be used by about 50 percent of the population.

How To Repair Gas Furnaces
How Espresso Machines Work
How can portable dishwashers improve small kitchens?