How to Protect Your Deck 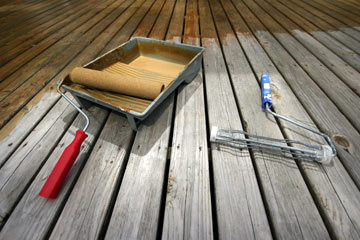 There's not too much you can do about what Mother Nature throws at your deck, but there's a lot that you can do to protect it. See more deck and patio decor pictures.
iStockphoto/Thinkstock

If you have a deck on your house, you know it takes a beating. It's constantly exposed to the elements, and it's always being trampled on by both people and pets. In fact, there's probably not too much that your poor deck hasn't had to deal with. Water, dirt, algae, bird droppings, bugs, humidity, harsh sunlight, snow, mildew, grease, mold, dust, hail ... you name it, the deck has seen it.

With all that a deck must withstand, it's a wonder any of them survives four seasons, much less the decades we expect out of them. And this is where you, the responsible deck owner comes in. There's not too much you can do about what Mother Nature throws at your deck, but there's a whole lot that you can do -- that you need to do -- to protect it.

Most deck owners know they need to clean and seal their decks every year or so to keep everything shipshape. But it's the little everyday maintenance tasks that will really extend the life of your deck in the long run -- and make the big cleaning and sealing jobs much easier. If you're attentive about keeping debris off the deck and noticing small problems when they arise, you'll be able to stay ahead of the game and avoid major disasters.

On the next page we'll go into more detail about how ensure that your deck stays upright, clean and safe for years to come.

Easy Steps for Protecting Your Deck

The most important thing you can do is sweep your deck regularly, paying close attention to cracks and the spaces between the decking. Clean stains as soon as you see them, and trim any encroaching shrubs and bushes. Wipe under furniture and planters every once in a while. Keep an eye out for loose nails and warped boards. Basically, be vigilant.

Autumn is the best time of year for the major cleaning and sealing projects. You want temperate and dry weather -- no rain for a few days before and after is ideal. Your cleaning method is going to depend on your decking materials: Pressure washing, for example, isn't the safest idea for wood decks. Too much pressure with an inexperienced hand (especially on an already sun-damaged deck) can destroy the deck's surface. Oxygen bleach and a good old-fashioned scrub brush is an effective, and environmentally friendly, option. For composite decks, a special cleaner followed by a gentle pressure-washer rinse is the way to go.

Wait three days or so after cleaning to tackle sealing. Again, keep your decking materials in mind when choosing a stain. A synthetic resin sealant might be a good option for most wood decks, but cedar does best with a water-based epoxy. The pigments and resins in sealers are what provide UV protection for your deck, so you'll probably want to pick a solid or semi-transparent product over a clear or translucent one. Above all, make informed decisions about your deck and closely follow the instructions on any product you use -- that will make all the difference in the longevity of your deck.

Self-Cleaning Toilets: How Do They Work?
How to Clean Stains Off Stucco
Types of Termites and the Damage They Cause