How to Repair Small Appliances

by Fix-It Club
NEXT PAGE 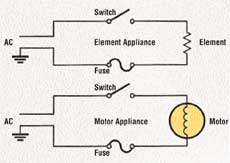 Electricity furnishes the energy that powers small appliances and other electrical devices. Current flows to the device through the hot (typically black) wire and returns through the neutral (typically white) wire. The power that moves the current is called voltage.

In most household systems, the hot wire has about 120 volts and the white wire has zero volts. The difference in voltage between the two wires moves the electric current and powers your appliance.

In this article, we'll tell you how to repair all of these appliances, and more. First, though, we'll provide an overview on fixing small appliances.

Heating appliances convert electrical energy into heat, which is used to toast bread, warm coffee, dry hair, or perform other helpful tasks. This heat is developed by passing current through a special wire called an element. Since the element makes it difficult for electricity to pass through it, some of its energy turns into heat. The electricity uses so much of its energy to overcome the resistance of a toaster element, for instance, that it glows bright red, thus toasting the bread.

Some small appliances both heat and move. The most popular is the electric bread maker. It mixes dough, then bakes it into bread. Bread makers also include diagnostic electronics that assist the owner in troubleshooting and repair, so they are not included in this article. Other combination appliances include hair dryers and stirring popcorn poppers.

Nearly all small appliances are powered by 120-volt electricity. This means that many of the problems that can occur with toasters can also occur with garbage disposers and hair dryers. These problems are caused by circuit breakers or fuses, switches and plugs, or grounded or loose wires.

In this article, you'll learn how to easily solve many common problems with small appliances, beginning with repairing cords.

Wires used in appliance cords are of different diameters, or gauges. The thicker the wire, the lower the gauge number. That is, a 12-gauge wire is thinner than a 10-gauge wire. Most small appliances use cord wires of copper strands insulated with heat-resistant plastic.

An appliance that requires less amperage to operate, such as a lamp, will typically have a two-wire cord of 18- or 16-gauge wire. Higher-amperage heating appliances will use a two- or three-wire cord of 14- or even 12-gauge wire. Two-strand cords include one hot wire and one neutral wire. A three-strand cord will have one hot wire, one neutral wire, and one ground wire.

The plug at the end of an appliance cord receives electricity from the wall receptacle. A two-prong plug is typically used for ungrounded appliances rated at less than 15 amps. Some two-prong plugs are polarized to ensure that the hot and neutral wires are connected correctly. The smaller prong is the hot wire, and the larger one is neutral.

Three-prong appliance plugs include one round prong used for grounding and ensuring that the hot and neutral prongs are inserted into the correct receptacle slots. Most small appliances are rated at less than 15 amps. A receptacle with a T-shaped neutral slot is designed to accommodate 20-amp appliances, though 15-amp cords can be plugged into it.

At the other end of the cord, inside the small appliance, the wires are connected to a switch, or controller. The wires may be connected with solder, with electrical twist-on nuts, or with connectors. These connectors physically and electrically connect the power source with the appliance.

The connection can be made with crimp connectors, clip or spade connectors, or with U- or O-connectors. Internal appliance wires are typically smaller than those used for cords, which means the gauge numbers are higher.

To test an appliance cord or wire, first make sure that it is disconnected from any electrical source or capacitor. Then use a continuity tester or multimeter to make sure it can adequately conduct electricity.

With the tester attached, move the wire to ensure that there is not a break in the strands that can cause intermittent shorts. Also check the quality and pliability of the cord or wire insulation. If there are any breaks or cracks that may eventually expose strands, replace the cord or wire with one of equivalent rating and gauge.

Electrical power coming into a small appliance must be controlled: turned on or off or varied based on temperature, time, or function. That's what appliance controls do. Appliance controls include switches, thermostats, rheostats, and timing mechanisms.

In many small appliance problems, a controller is the culprit. So, before you begin tearing your toaster or vacuum apart, let's see how small appliance controls work -- and what to do when they don't.

Most small appliance switches are activated by hand to control the flow of current in an appliance. A single-pole switch is pushed or moved to turn power on or off. Multiposition switches allow set amounts of current to flow, such as a multispeed switch for a blender.

A thermostat opens and closes a circuit to furnish current based on temperature. The simplest, a bimetallic thermostat, uses two bonded pieces of metal with different heat ratings. At room temperature, for example, both metals are of identical length and form, allowing contact points in the circuit to touch. Heat flexes one of the two metals and causes them to pull the contacts apart, opening the circuit and stopping current from passing.

Thermostats can be used to turn a heating element or a motor on or off. In fact, thermostats are used as overload protectors that open a circuit and turn off a motor if it overheats or overloads.

A rheostat is a variable controller. That is, it variably controls the amount of current flowing to an appliance component. A blender with a speed control that can be turned to increase or decrease motor speed uses a rheostat to do so. Because rheostats can be damaged by moisture, they can easily malfunction. In that case, they must be replaced with a rheostat of the same type and function. Rheostats are also called potentiometers or "pots."

A timing mechanism controls current flow based on a mechanical or digital timing device similar to a clock. A timing mechanism in your coffee maker can furnish fresh coffee in the morning. In most cases, timing mechanisms turn small appliances on or off. When a timed appliance doesn't turn on, one of the first components to check is the timing mechanism. Some can be repaired, while others must be replaced.

Appliance controls are easily tested with a continuity tester. By placing the clip on the input side and the tester probe on the output side and activating the controller, you can

determine whether the control is functioning properly. For variable controllers, it may be easier to use a multimeter that will show you a change in resistance.

Most defective small appliance controls should be replaced rather than repaired. Once you remove the controller from the appliance, take the part, along with the appliance's model and serial numbers, to an appliance-parts dealer or electronics store to ensure that the appropriate replacement is found. A switch with a higher amp rating or a rheostat with a higher ohm rating can damage your appliance's heating element or motor. It can also be dangerous to the operator.

Where can you find replacement parts for small appliances? First, check your owner's manual to identify the model and part numbers. If you live in or near a metropolitan area, you may have a number of appliance-parts stores from which to purchase. Of course, call them first to determine if they have or can get the type of parts you require. Then take the defective part in for a side-by-side comparison with the replacement part to double-check the match before you purchase it. As a last resort, you can write to the manufacturer. In most cases, they will refer you to an area appliance-parts dealer.

Since most small appliances are made up of similar parts, it's pretty easy to troubleshoot any problem once you have the basics down. However, there are specific tips for each small appliance that may come in handy. Let's start by taking a look at how to repair toasters.

Before you toss that toaster, hair dryer, or other small appliance, make sure the problem with it isn't easy to fix. Click here for a troubleshooting chart to help you identify the culprit.