How to Repair Small Appliances

How to Repair a Toaster 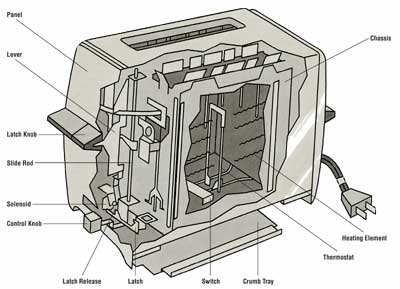 ©2006 Publications International, Ltd. This cross section of a toaster indicates the various elements that make a toaster work.

Toasters are categorized as heating appliances. Their function is to develop sufficient heat near a slice of bread to heat and toast it. Breakfast certainly wouldn't be the same without the pop-up toaster.

In many homes, toasters malfunction more than any other small appliance. There are two reasons for this. First, toasters are typically built economically to be a throw-away appliance. Replacement models start at $10.

For a toaster that is used daily, this should be done once

a week. Simply unplug the toaster, hold it over a trash

container, and unlatch the door. Once the primary food particles have fallen out, move the toaster around to release other particles that may be trapped at the edges. Periodically clean out the toaster using a can of compressed air, making sure you don't damage sensitive heating elements or switches.

Most electric pop-up toasters all operate in the same manner. A slice of bread, a frozen waffle, a toaster strudel, or some similar food item is placed through a slot in the top of the toaster and into the carriage. The carriage is lowered into the chassis using the lever at the side of the toaster.

When it reaches the bottom, the carriage latches in position and an internal switch is activated to start the heating process. A thermostat determines how long electric current will be sent from the power cord to the heating elements.

The person who is operating the toaster sets the thermostat using a control knob or lever calibrated between light and dark. When the desired temperature is reached and the heating process is completed, the solenoid turns the current off, then unlocks the latch and allows the carriage to spring up to its original position. At this time, the toasted food is easily reachable and can be removed by the operator of the appliance.

How to Repair a Toaster

Servicing the Latch Assembly: The carriage and latch are vital components to the operation of pop-up toasters. If they don't work smoothly, bread or other food products cannot be held in position to be heated. To clean and lubricate the latch:

Step 2: Once the cover is removed, inspect the latch assembly to determine if there are obvious problems such as a food particle or loose part jamming the assembly. Clean the latch area using a can of compressed air to blow away crumbs.

Step 3: Move the carriage lever up and down to check for smooth operation. If the carriage moves stiffly, carefully lubricate the rod on which the latch lever travels. Use a petroleum lubricant, making sure you don't get any of it on adjacent electrical parts.

Step 4: Check the operation of the latch to ensure that it works smoothly. You may need to carefully bend the latch so it catches properly.

Servicing the Chassis: Most of the mechanism within a toaster is mounted on a frame called the chassis. To repair or replace many internal parts, including the heating elements, you will need to remove the chassis from the toaster shell. Disassemble the toaster by removing levers, knobs, and fasteners, then carefully lift the shell off the chassis.

Some toasters will require that you disconnect the power cord internally before you can fully remove the chassis. Depending on the problem your toaster is having, you may want to replace the entire chassis or just one or two components.

Recalibrating a Thermostat: The thermostat in a pop-up toaster performs a vital function in telling the solenoid how long you want the heating elements to toast the bread. If your toaster seems to ignore your setting, the thermostat may be out of adjustment. To recalibrate the toaster:

©2006 Publications International, Ltd. A calibration knob, screw, or nut can be turned to recalibrate the thermostat.

Step 1: Clean the toaster to ensure that food particles are not jamming the mechanism or shorting out the electronics.

Step 2: To recalibrate the thermostat, make sure the toaster is cool, turn it over on its top, and open the crumb tray cover.

Step 3: On most units, a bracket from the control

too dark or lengthen the cycle if the toast is too light.

The solenoid is located near the latch at one end of the toaster. To access it, remove the end cover, or the shell. Test the solenoid with a continuity tester and replace if faulty. If either the solenoid or switch is installed with rivets rather than screws, consider replacing the entire chassis or the toaster itself. Riveted parts are difficult to remove and replace without special tools.

Think you've mastered toaster repairs? Take that knowledge and use it to help you fix toaster ovens. The tips on the next page will assist you.

Toasters can stop working for various reasons, such as an obstructed latch or a faulty chassis. Click here for a complete guide to troubleshooting toasters.