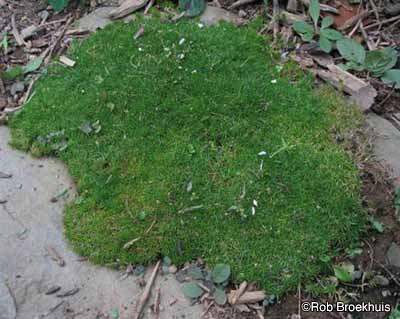 This plant looks so much like moss that most people cannot be convinced otherwise -- until it blooms. The tiny white flowers, though, are proof that this rock garden miniature is not even related to moss, which are primitive plants that never bloom.

Growing Irish moss: Irish moss grows best in full sun to light shade and in good, well-drained soil. With time, one plant forms an attractive carpet of greenery. Occasionally, growth becomes crowded, pushing sections of the carpet upward. If you consider this less attractive, cut out a slice of the plant and push down until the roots are in contact with the soil. Any empty space resulting from this surgery will be quickly filled with greenery.

Propagating Irish moss: Cut out sections and press down in moderately moist soil.

Uses for Irish moss: Irish moss makes an elegant and attractive rock garden plant, forming a cushion of greenery in even the shallowest soil or the narrowest of cracks as long as it is not allowed to entirely dry out. It can also be planted between stepping stones or in cracks in pavement since it can tolerate some foot traffic.