What are lag screws? 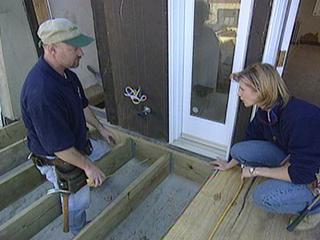 Lag screws are some of the toughest types of screws out there. Also called lag bolts, lag screws are generally used to connect heavy lumber and other materials that bear an intense load. They're different from other more common screws such as wood screws, sheet metal screws and self-drilling screws. Each has its own purpose, although some screws overlap onto other screws' territory.

For instance, wood screws are used to connect wood to wood. They're threaded coarsely, but not all the way up. They differ from lag screws because they thread their way through the wood as they're screwed in, whereas lag screws require you to drill a hole first. Also, lag screws take advantage of a nut on one side to help hold things together; the tight fit of the wood screw negates the need for a nut. However, since wood screws are normally smaller than lag screws and don't use nuts, they can't bear the loads that lag screws can. Both wood screws and lag screws differ from sheet metal screws, which have threads all along the shaft. They're required any time you screw through metal, even if you're attaching the metal to wood. Self-drilling or self-tapping screws are like sheet metal screws, but they cut their own holes as they're driven in, so you don't have to drill a hole for them first.

While wood screws, sheet metal screws and self-tapping screws come with a variety of head types, lag screws are only available with hex heads. To drive in a screw with a hex head, you need to use a nut driver or ratchet. Hex heads are used when a lot of torque is required. Meanwhile, other types of heads are compatible with a variety of drivers, depending on the drive. Some have slotted heads, and others have Philips heads. Torx drive screws are one exception.