Browse the article Does fertilizer help or hurt my lawn? 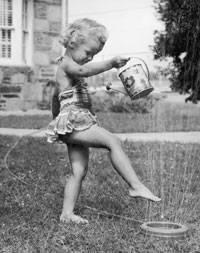 Lawns (and playing on them) first became widespread after World War II and the advent of the suburbs. See pictures of famous gardens.
Lambert/Getty Images

Grass has always played an important role in the global ecosystem. It sustains foraging animals -- and since the domestication of livestock about 10,000 years ago, in turn sustains humans. It helps prevent erosion, which became particularly important in the United States following the Dust Bowl of the 1930s [source: Ehlke and Undersander]. And grasses even sequester carbon dioxide (as one part of the carbon cycle), produce oxygen and filter pollutants from the air.

Humans have demanded another role from grasses: ornament. After World War II, Westerners became smitten with the concept of neatly trimmed lawns. The wealth of postwar United States and Canada gave rise to the suburbs. More people could afford to buy their own slice of heaven -- complete with a yard. Couple this with the mid-20th century advancements in grass seeds, fertilizers and mowers, and, brother, you've got a recipe for lawn love [source: Canwest].

In short order, the sound of lawn mowers and the smell of grass clippings became ubiquitous parts of the suburban cultural landscape. And plants that formerly seemed benign -- like dandelions and clover -- were suddenly thrust into the role of adversary. It became customary to award well-manicured lawns with signs boasting, "Yard of the Month."

This award has graced your yard more than a few times and you're very proud of your lawn. But you have a dirty little secret: You have no idea why your lawn looks as good as it does. You're clueless -- it's all luck. Take fertilizer, for example. You spread some on from time to time when you think of it, but really you couldn't say whether it's helping or not. For all you know, fertilizing your lawn could actually hurt it. That's certainly a terrible question to leave unanswered, and it's one you've avoided asking the neighbors. You'd be exposed as the fraud you are, for sure. Relax, we're here to help. Find out on the next page whether fertilizing helps or hurts your lawn. 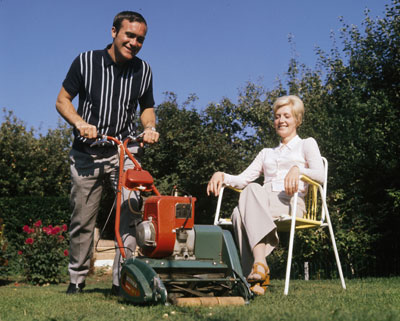 Chelsea Football Club player Ron Harris mows his lawn as his wife watches at their home in England in 1970. Mr. Harris appears to have a warm-season grass growing in his remarkable yard, possibly Bermuda.
A. Jones/Express/Getty Images

Both fertilizing at the wrong time and over-fertilizing can hurt your lawn and cause you plenty of heartache. Grass varieties used for lawns at most homes can be divided into two categories: warm-season and cool-season grasses. The names refer to the type of weather in which the grass has adapted to grow. Cool-season grasses, like fescue and bluegrass, grow best when temperatures are mild, like in the early spring and fall. Warm-season grasses, like Bermuda and zoysia, do most of their growing in the heat of summer. It's when your lawn is growing its heart out that it needs fertilizer the most.

But applying fertilizer at the wrong time can hurt a warm-season lawn. Fertilizers of all stripes -- chemical or organic, granular or liquid -- are denoted by a string of numbers; for example, 22-3-14. The numbers represent the percentage of nitrogen, phosphorus and potassium present in the fertilizer by weight [source: ACES]. So, for example, a 100-pound bag of 22-3-14 fertilizer has 22 pounds (9.97 kg) of nitrogen, 3 pounds (1.36 kg) of phosphorus and 14 pounds (6.35 kg) of potassium in it. The rest is filler, or secondary ingredients like iron that help the important components disperse more evenly.

Nitrogen is what harms a warm-season lawn when applied during the wrong time of the year. It's super plant food and promotes rapid growth -- you'll usually see results in a few days after you apply it. Nitrogen promotes quick top growth, or growth of shoots (the actual blades of grass). But other parts of the grass plant need attention too; the phosphorus aids in root growth and development, while potassium keeps the plant healthy and disease-resistant. When too much nitrogen is introduced to the soil, the plant works overtime on top growth, taking energy away from root growth and overall plant health. This leads to weak, thin lawns that are susceptible to pests and disease (as well as unhappy homeowners).

While the fast growth that nitrogen stimulates can be a good thing with warm-season grasses during the summer months, in the fall and winter, these grass varieties go dormant -- essentially hibernating for the cold season. When nitrogen-based fertilizer is applied during cold or cool temperatures, the grass will grow, whether it's supposed to or not. The fertilizer will wake the grass from its slumber, resulting in new growth, which makes grass susceptible to frost and shock [source: LSU]. This exposure can weaken the health of your lawn.

Even during the right time of year, applying fertilizer can hurt a lawn. It's recommended that you fertilize no more than three to four times a year (just three times in the summer for warm-season lawns and two to three in the fall, and once in the spring for cool-season grass). The applications should be a month apart [source: Consumer Reports]. While chemical fertilizers are pretty easy to over-fertilize with, organic fertilizers contain much less nitrogen and don't pose as big a threat to your lawn if overused. If you're crazy about fertilizing your lawn, try leaving your grass clippings in situ, rather than bagging them. Nitrogen, phosphorus and potassium are all present in grass clippings, and provide a good source of food to sustain your lawn between fertilizing applications [source: University of Minnesota].

For more information on gardening and other related topics, visit the next page.