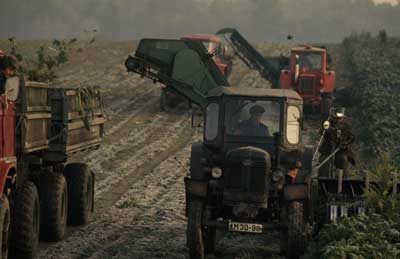 This German farm may be successful, but is it sustainable? How many outside resources, such as gasoline, pesticides and fertilizer, does it require?
Gordon Gahan/National Geographic/Getty Images

Have you ever imagined what human habitation of another planet might be like? Perhaps you envision clusters of white, cylindrical modules under the harsh Martian sun, or maybe you dream of forest-filled domes floating high above the Venusian atmosphere. Whether fueled by NASA schematics or science fiction, most visi­ons of planetary exploration involve, by necessity, closed environments shut off from the surrounding world and supported mostly by imported supplies.

It makes sense to live this way on Mars, where the natural environment doesn't support human life. There, scientists would have to artificially sustain any Earth life. But why live this way in one of Earth's own temperate zones?

You probably won't notice anyone living in the hull of a spaceship in your neighborhood. But you might find subtler examples of agriculture and landscaping that de-emphasize the natural ecosystem and establishes some other order in its place. Would that finely manicured front yard look so nice without constant gardening and irrigation? Do those acres of corn grow naturally or do they depend on gas-powered machines and an input of fertilizers, soil and pesticides?

­These farms and lawns are unsustainable, meaning that they regularly deplete themselves of resources and depend on the import of more resources to survive. Earth is home to countless, thriving ecosystems, where nutrients and energy constantly move in self-sustaining, permanent cycles. Instead of promoting unsustainable farming systems, why don't we just stick with what works?

This is where permaculture (permanent agriculture) comes into play. It centers on the theory that human habitats and food production systems don't have to artificially exist outside of natural ecological systems. This is a holistic approach, meaning that it views humans as a part of the larger ecological system and not as something standing separately.

In this article, we'll look at the origins of permaculture, its various applications and some examples of how permaculture allows for a more sustainable, environmentally-friendly way of life. 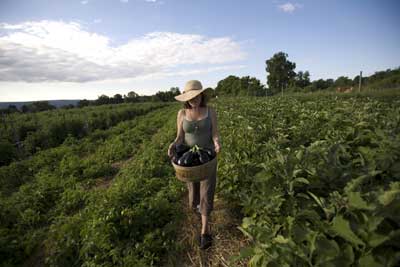 A woman harvests organically grown eggplants on a New York community farm, which is based around the principles of sustainability and environmentalism.
Robert Nickelsberg/Getty Images News/Getty Images

While it's a far cry from viewing the environment as a hostile foe to be conquered, permaculture also shouldn't be confused as a return to the days of scavenging for berries. Think of an ecological system as a river. The aim of permaculture is not to swim against the current or let it sweep you powerlessly down the stream. Like a boat floating down a current, permaculture, ideally, is sustained by the system it navigates without letting it dictate every detail of its course.

Permaculturists push for integrated farming and ecological engineering which, in theory, allow farms and communities to pursue their own ends in a way that works with, not against, their environment.

Australian ecologist Bill Mollison and his student David Holmgren introduced the word "permaculture" in 1978 [source: Diver]. The duo developed the concept as a new, self-sustaining alternative to conventional agriculture, which typically involves focusing large amounts of resources on the mass production of a single crop.

While the term may be less than a century old, many of the ideas behind permaculture have been around for thousands of years. Ancient civilizations practiced such growing strategies as planting multiple crops, forest farming, crop rotation and composting long before environmentalism came into being. In this sense, permaculture isn't as much a radically new way of farming, as a melding of traditional, commonsense agricultural methods with modern ones.

Since the late 1970s, the permaculture movement has expanded out of Australia. Enthusiasts continue to push for mainstream acceptance of permaculture values throughout the world. Today, efforts range from the small-scale implication of permaculture design principles in household gardens to wide-scale, full-farm initiatives and permaculture communities. A number of permaculture programs and institutes boast their own functioning permaculture farms, as well as offer texts and classes for interested farmers.

Permaculturists pursue their ideals by following a number of key design principles. Read the next page to learn all about the different strategies that go into building a permaculture farm.

The movement not only involves chemical-free organic farming, but also a number of key permaculture design principles aimed at keeping modern farming methods streamlined with nature.

On the next page, we'll examine some of the ways in which permaculturists have carried out their ideals. 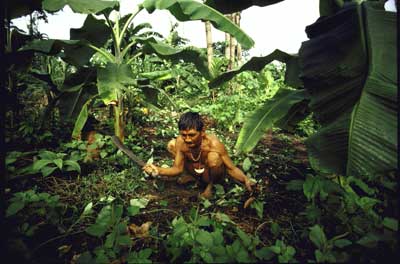 A Yanomami Indian weeds a forest garden in the Amazon, illustrating how permaculture practices existed long before the term itself.
Victor Englebert/Time & Life Pictures/Getty Images

Farmers eager to try permaculture don't just set out with a list of principles and hope to make the best of it. Permaculture texts and classes encourage a slow adoption of permaculture practices following careful observation and study of what would work best for a specific piece of land. Some permaculture farms eventually reach levels of full-time sustainability, while others focus on particular areas of their farms. Results vary as farmers continue to explore methods that follow the principles of permaculture design.

While full-scale permaculture farms are mostly found among activists and educators of the movement, many of their methods have gained widespread usage. It's now easy to see examples of permaculture in action. Planting a forest garden, for example, is a permaculture activity available to anyone with lawn space. A forest garden is simply a food garden created to imitate a natural forest. This cuts out gardening chores like tillage and crop rotation. To start a forest garden, choose a selection of food plants and soil-enriching plants that work well with each other in a forest system. This consists of four layers:

As highly developed urban areas continue to grow and depend increasingly on food imports, permaculturists and architects have begun to explore the application of urban permaculture. This involves applying the principles of permaculture design to urban settings. The aim is to make cities greener with higher degrees of sustainability. Examples include buildings that support outside plant life, backyard and balcony gardens, and energy-saving green initiatives such as the installation of gray water reclamation systems.

The permaculture movement has its critics. Some dispute the possible crop yields forest gardening can offer and criticize some studies' alleged lack of comparative figures between permaculture and contemporary agriculture.

Also, the use of exotic plants in permaculture has provided a great deal of controversy. Many permaculturists, including co-founder Bill Mollison, have pushed for the import and use of exotic plants to create effective systems. The problem, critics argue, is that many of these plants could become major weed pests and potentially push out native plant species.

Critics charge that the introduction of exotic plant species could inflict considerable damage on natural ecosystems. In answer to this, many permaculturists stress the use of native plants whenever possible. Still others, including Mollison, insist that modern agriculture has damaged Earth to such a point that providing for a sustainable future is more important than preserving current ecosystems.

Want to learn more about how to apply the permaculture principles to your own yard? Explore the links on the next page.

Isolation and Monotony Stress the Brain. Here's How to Cope
April 9, 2020

What's the Difference Between Sasquatch and Bigfoot?
April 9, 2020