How much do you know about microwaves?
Photo courtesy Panasonic and Matsushita Electric Corporation of America

­T­he microwave oven could be one of the great inventions of the 20th century -- hundreds of millions of homes worldwide have one.

­Just think about how many times you use a microwave every day. You're running late for work, so there's no time to fix breakfast at home. On your way to the office, you stop to gas up your car. Inside the quickie-mart, you grab a frozen breakfast burrito and pop it in the microwave on the counter. Later that day, you have to work through lunch. By 3 p.m., you're starving, so you grab a snack-pa­ck of microwaveable popcorn from the vending machine and pop that in the break-room microwave. That night, after a really long day at work, you're simply too tired to grill out, so you dish up last night's lasagna and heat it up in the microwave ...

As you can see, microwave ovens are popular because they cook food in an amazingly short amount of time. These ubiquitous appliances are also extremely efficient in their use of electricity because they only heat the food, not, theoretically, the microwave-safe container the food's in. In this article, we'll discuss the mystery behind the magic of "meals in a minute" with microwave cooking. 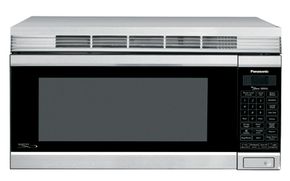 ­Not surprisingly, a m­icrowave oven uses microwaves to heat food. Microwaves are a type of wave that are sandwiched between radio waves and infrared radiation on the electromagnetic spectrum. In the case of microwave ovens, the commonly used wave frequency is roughly 2,450 megahertz (2.45 gigahertz).

Waves in this frequency range have an interesting property: They're absorbed by water, fats and sugars. Once absorbed, they're converted directly into atomic motion -- heat. These waves boast another interesting, related property, too: They're not absorbed by most plastics, glass or ceramics. Metal reflects microwaves, which is why metal pans don't work well in a microwave oven. It's also why the devices have metal walls -- for reflection. 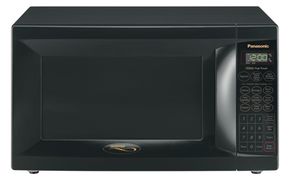 ­You often hear that microwave ovens cook food "from the inside out." What does that mean? Here's an explanation to help make sense of microwave cooking.

Let's say you want to bake a cake in a conventional oven. Normally you would bake a cake at 350 degrees F (177 degrees C) or so, but this time you accidentally set the oven at 600 degrees F (316 degrees C) instead of 350. What is going to happen? The outside of the cake will burn before the inside even gets warm.

In microwave cooking, the radio waves penetrate the food and excite water and fat molecules pretty much evenly throughout the food. No heat has to migrate toward the interior by conduction. There's heat everywhere all at once because the molecules are all excited together. There are limits, of course. Microwaves penetrate unevenly in thick pieces of food (they don't make it all the way to the middle), and there are also "hot spots" caused by wave interference, but you get the idea. The whole heating process is different because you are "exciting atoms" rather than "conducting heat."

In a microwave oven, the air in the oven is at room temperature, so there's no way to form a crust. That is why microwavable pastries sometimes come with a little sleeve made out of foil and cardboard. You put the food in the sleeve and then microwave it. The sleeve reacts to microwave energy by becoming very hot. This exterior heat lets the crust become crispy as it would in a conventional oven.

For more information on microwave cooking and related topics, check out the links on the next page.