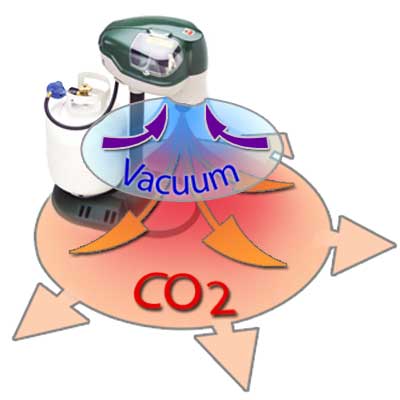 ­To create an artificial cow, you need to have three things:

­­If you have these three things, you have everything you need to attract many varieties of mosquitoes. A machine that combines an artificial cow with an automatic vacuuming system would make a very effective mosquito trap.

­Several manufacturers have created such a machine, and one of them is called the "Mosquito Magnet." The way these machines work is quite ingenious.

­The source of the carbon dioxide in the mosquito trap is propane. Propane is a gas that contains carbon and hydrogen, so when you burn it you get carbon dioxide and water vapor. Traditionally, we burn propane with a flame, for example in a barbecue grill.

Modern mosquito traps put an interesting twist on the burning process. Instead of a flame, they "burn" the propane catalytically, using the same idea as that used in the catalytic converter on your car.

The propane comes in and hits the catalyst -- a set of ceramic beads or a ceramic grid coated with platinum. The catalyst converts the propane directly to heat, carbon dioxide and moisture without actually needing a flame. The advantage of this system is that you can catalyze very small quantities of propane over a long period of time without having to worry about the flame ever going out. In addition, there are no worries about other gases, like carbon monoxide or nitrogen oxides, being produced by the flame. The lack of a flame also cuts down on fire risks.