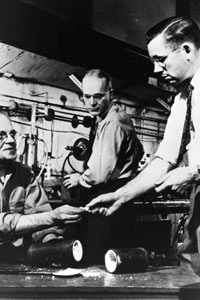 ­The discovery of the first nonstick technology started with research on another modern kitchen staple -- the refrigerator. Scientists at the Kinetic Chemicals plant, a subsidiary of DuPont, were searching for a less toxic chemical to use as a new refrigerant.

An Ohio-born scientist named Roy Plunkett was part of this research team. In 1938, he set up a mixture meant to produce tetrafluoroethylene gas and left it overnight. The next morning, he arrived to work to find a white, waxy substance in place of the gas he had expected. After analysis, the new substance was found to be polytetrafluoroethylene, or PTFE, and was quickly recognized as an exceptionally slippery substance. The chemical was patented in1941. DuPont trademarked the process and chemical as Teflon in 1945 [source: DuPont]. Plunkett was inducted into the National Inventors Hall of Fame for his invention of Teflon in 1985 [source: National Inventors Hall of Fame Foundation].

It was not until Marc Gregoire, a French engineer, found a way t­o bond PTFE to aluminum that the first nonstick cookware was created. Marc Gregoire and his wife, Colette, started selling their cookware in France. In 1956, they founded the Tefal Corporation [source: T-fal]. The U.S. Food and Drug Administration (FDA) approved PTFE for food processing equipment in 1960 [source: Blumenthal]. With this approval, Tefal, known as T-fal in the U.S., began selling its pans in the United States. Other manufacturers soon joined the market.

Today, lots of people describe their nonstick pots and pans as "Teflon," but using the term to ­describe anything with a nonstick coating is incorrect. Teflon is a brand name -- not all PTFE or other fluoropolymers used to produce nonstick cookware fall under the Teflon brand. Next, we'll take a closer look at PTFE and how it keeps what you're cooking from sticking to what you're cooking in.

Special thanks to William Raiford, technology manager with DuPont Fluoroproducts, and Mary Rodgers, director of marketing communications with Cuisinart, for their invaluable assistance with this article. ­