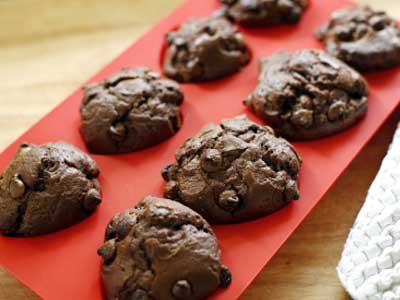 Silicone can become a floppy muffin tin or a nonstick coating for a metal pan.
© iStockphoto/UteHil

­For decades, fluoropolymer nonstick coatings have ruled the market, but within the last couple of years, a few new technologies have appeared on the scene. Most of these are based on two relat­ed technologies -- silicon ceramics and silicone. Cuisinart's Ceramica, for example, is a nonstick ceramic that was first used in its GreenGourmet line. The coating does not contain PTFE or PFOA.

Another ceramic nonstick coating is Thermolon. The coating is mostly composed of silicon and oxygen. It is applied as a single layer over the metal of the pan and then followed by a protective or decorative top coat [source: Phillips]. The manufacturer promotes the new technology as PTFE-free and more eco-friendly due to less energy usage during the production process [source: Phillips]. Thermolon has a number of different formulations of its coating for specific nonstick cookware needs. GreenPan brand cookware uses Thermolon technology for its nonstick surface [source: GreenPan].

Another technology is silicone-based. You've probably seen or used silicone bakeware -- a product called NP2 takes advantage of silicone's slipperiness to create a PTFE-free nonstick coating [source:AkzoNobel]. Tramontina's new Eco-friendly Cookware line uses the NP² nonstick technology. The company states that this cookware can be used to both sear and brown foods as well as used in the oven up to 350 degrees Fahrenheit (177 degrees Celsius) [source: Tramontina USA].

Thermolon technology arrived on the U.S. market in 2007, while Ceramica technology and NP² became available to consumers in 2008. Due to the relatively short time these new technologies have been on the market, little research has been done on their performance. However, it's clear that in the decades since the discovery of PTFE, technology continues to make food preparation an easier and faster process.

For more about nonstick cookware and other related topics, spend some time investigating the links below.