What is the difference between a fluorescent light and a neon light? 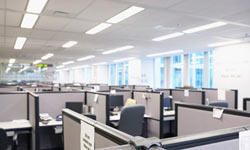 A neon light is the sort of light you see used in advertising signs. These signs are made of long, narrow glass tubes, and these tubes are often bent into all sorts of shapes. The tube of a neon light can spell out a word, for example. These tubes emit light in different colors.

The idea behind a neon light is simple. Inside the glass tube there is a gas like neon, argon or krypton at low pressure. At both ends of the tube there are metal electrodes. When you apply a high voltage to the electrodes, the neon gas ionizes, and electrons flow through the gas. These electrons excite the neon atoms and cause them to emit light that we can see. Neon emits red light when energized in this way. Other gases emit other colors.

The light we see from a fluorescent tube is the light given off by the phosphor that coats the inside of the tube (the phosphor fluoresces when energized, hence the name). The light of a neon tube is the colored light that the neon atoms give off directly.

How does a fluorescent starter work?
How Fluorescent Lamps Work
How Bug Zappers Work

How Often Should You Clean Your Humidifier?
Why do the two flat prongs on the plugs for electrical appliances have holes in them?
How Home Thermostats Work