by Joseph Miller
Prev NEXT
3 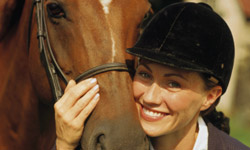 If you love horses and you're not overwhelmed by a $3.9 million mortgage, you can call Rolling Hills home.
Comstock/Thinkstock

Another posh bedroom community, Rolling Hills, Calif., is the only city on the list that is a private, gated community in and of itself. The small city with a median home price of nearly $3.9 million sits atop the Palos Verdes Peninsula, a short drive southwest of downtown Los Angeles [source: Forbes].

The equestrian-themed community has about 50 miles (80 kilometers) of named horse trails, though the city itself is only about 3 square miles (nearly 8 square kilometers) in size. With a full-time staff of only four, Rolling Hills also has no public infrastructure [source: Rolling Hills]. The rich who live here have two things in common: big homes and horses. Like many other ZIP codes on this list, Rolling Hills is strictly residential; there's no industry or manufacturing, and homeowners do all their shopping outside the gated city.