by John Barrymore
NEXT PAGE 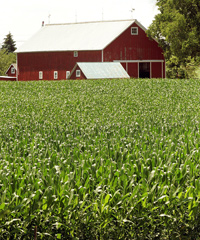 Farm buildings stand near a corn field in Lincolnshire, Ill. Real property like this contribute to the size of a property tax bill.
Tim Boyle/Getty Images

Taxes, as unpleasant as they may be, are how governments pay for public programs and services. Most everyone in the United States is familiar with federal and state income tax. But if you've never owned real estate or your own business, you may not know how real estate property taxes work.

It wasn't until much later that the value of land came to be seen as the land's ability to output goods and services, and thereby create profit for its owner. Tax assessors began examining other property on the land, including structures, farming equipment and livestock. Why? Governments figured, for example, that if Lord Garish had 1,000 cows, three stables housing 30 horses, a castle and a windmill jammed onto a small piece of land, Lord Garish could afford to pay more property tax than Lord Frugal, who had only 13 cows and a butter churn on a large piece of land.

In the colonies that eventually became the United States, local governments levied a "general property tax" [source: Britannica]. Colonists paid taxes on all property, whether real estate or personal.

Today, property taxes in the United States are mostly based on real property, though some states do tax certain items of personal property. Office buildings are usually taxed according to the rental income they provide for their owners.