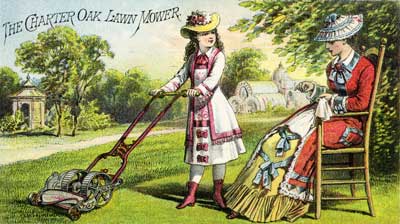 This reel mower advertisement from the 1870s stresses the product's lightweight, easy-to-use design by demonstrating that even a little girl can use it.
Transcendental Graphics/Hulton Archive/Getty Images

Reel mower history dates back hundreds of years. Prior to the early 1800s, a home's lawn maintenance fell largely to grazing animals or the manual use of scythes, swing blades and gardening sheers. For people with the time and inclination to manicure their lawns, this worked just fine. But the 19th-century world was experiencing rapid change. Europe was riding the wave of technological achievements and discoveries, known today as the Industrial Revolution.

Inventors throughout the 1800s made huge strides, from developing steam power to manufacturing machine parts. Inventors aimed their efforts at improving vital production processes such as coal mining, textile production and transportation. New technologies, however, always have a way of trickling down to even the most mundane uses.

British engineer Edwin Beard Budding made just such a connection between new technology and daily life. He observed a machine at a local textile mill that trimmed cloth with a bladed reel or cutting cylinder. Envisioning the possibilities of applying the technology toward lawn maintenance, he teamed up with engineer John Ferrabee. Together, they produced the world's first lawn mower in 1830.

The two engineers simply took the bladed reel, mounted it on a wheeled cart and arranged a system of gears to transfer wheel rotation to reel rotation. The mowers were heavy, cast-iron devices, but after Budding and Ferrabee's patents expired, other inventors began improving on the design. These new reel mowers were lighter and required less effort to push. Some inventors even replaced the gears with drive chains, like those on bicycles.

During the 1890s, other inventors attempted to add a power source to reel mowers. They tried both horsepower and steam power before small-engine technology advanced enough to become the standard. Today, most of the gas mowers used for home lawns are rotary mowers, which employ a horizontal, fan-shaped blade. While gas-powered reel mowers are still around, many of them are large, tractor-powered vehicles intended for the upkeep of sports fields and farms.

While gas- and electric-powered mowers have continued to evolve over the decades, the manual reel mower's basic design has remained the same. On the next page, we'll take a look at its different parts.