What are some repairs that require vise-grip pliers? 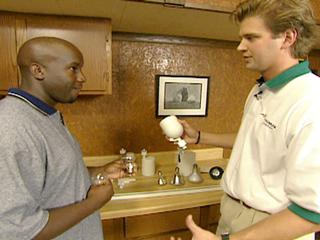 Pliers are hand tools used to grip things and sometimes to cut wire. They work like simple levers with a fulcrum in the middle. The fulcrum, or the joint, increases the force that you exert on the handles and channels it to the jaws on the other end. There are three basic categories of pliers: locking, adjustable and nonadjustable. Locking pliers let you tighten the jaws of the tool onto whatever you're working on so that they don't slip while you're pulling or rotating them. Vise-grip pliers fall under the "locking pliers" category.

Vise-grip pliers were first invented by a Danish blacksmith in Dewitt, Neb., named William Petersen [source: Ganzel]. Petersen figured out that his work would be easier if he had a way to hold the pieces he was working on without resorting to a traditional vise. He patented his first pair of vise-grip pliers in 1921. To lock vise-grip pliers onto an object, first grab it with the pliers and adjust the jaws by turning the screw at the end of the handle. When you squeeze the handles, the jaws lock into place. Curved-jaw locking pliers are best for loosening frozen nuts and bolts and for all kinds of demolition. Long-nose locking pliers let you clamp on to small items such as staples, nails, pins and broken screws to pull them out from wherever they're stuck.

Vise-grip pliers have a myriad of uses beyond removing broken screws and loosening frozen nuts. You can use them to clamp small things in place, to remove stripped or broken screws and even to open a zipper when the pull breaks off. Vise-grip pliers are also good in a pinch to close off a leaky radiator tube until you can get your car to the service station. But be careful with them: Since they're so strong, you can accidentally damage or break whatever it is you're clamping.