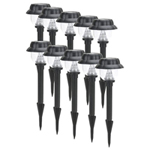 Solar yard lights generate and store their own power in the day and release it a night.

If ­you have a yard and have ever thought about lighting it at night, then you have probably heard about solar yard lights. They are still pretty expensive, but their advantage is that you don't have to run any wiring for them. As long as a location gets direct sunlight, you can put a light there in about 15 seconds.

­These­ lights are extremely interesting because they are almost like mini-satellites. They generate and store their own power during the day and then release it at night. This is just like a satellite that stores solar energy while it is on the sunny side of the planet and then uses that energy when it's on the dark side. In this article, you will learn exactly how it happens!

A solar light consists of the following components:

If you pop off the cover, you will find that all of the working components are mounted as a single unit. On the back side you see this:

Next, we'll take a closer look at some of these components.

Inside a Solar Yard Light 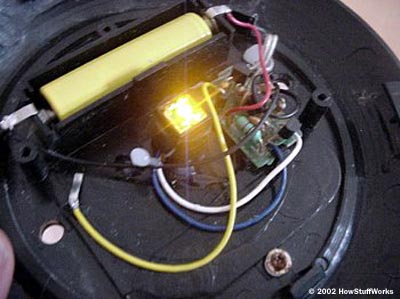 You can see the battery, LED and controller board. If you cover the light sensor, the LED turns on, like this:

Here are close-ups of the LED and the controller board:

On the other side of this module is a four-cell solar array, measuring 2 inches by 2 inches (5 cm x 5 cm), and the photoresistor:

Here is a closer view of the photoresistor:

See How do the streetlights turn on automatically at night? for more information on how photoresistors work.

Now let's see how the whole setup works to light your yard at night.

If you have read the article How Solar Cells Work, you have a basic understanding of solar-cell technology. A solar yard light uses standard solar cells in a very straightforward application.

A single solar cell produces a maximum of 0.45 volts and a varying amount of current depending on the size of the cell and the amount of light striking the surface. In a typical yard light, therefore, you need four cells wired in series (see How Batteries Work for a discussion on series wiring). In this yard light, the four cells will produce 1.8 volts and a maximum of about 100 milliamps in full, bright sunlight.

The solar cells are wired directly to the battery through a diode (which prevents the battery's current from flowing back through the solar cell at night). The battery is a completely standard AA Nicad battery. A battery like this produces about 1.2 volts and can store a maximum of approximately 700 milliamp-hours. During the day, the battery charges, reaching maximum charge except on shorter winter days or days when there is heavy overcast.

At night, the solar cells stop producing power. The photoresistor turns on the LED. How do the streetlights turn on automatically at night? shows you a very simple circuit using a transistor and a relay to control a light using a photoresistor. In the case of this light, the relay is replaced by two other transistors.

The LED draws about 45 milliamps with the battery producing about 1.23 volts (0.055 watts). It produces about half of the light that a candle would. The Nicad battery, when fully charged, can operate the LED for about 15 hours.

Half of a candle's light is not very much, and if you have ever purchased one of these yard lights you know that it really is not enough to provide illumination. You use them more for marking a trail -- they are bright enough to see, but not really bright enough to illuminate the ground to any great degree.

The reason why these lights are so expensive right now is because of the solar cells and, to a lesser degree, the Nicad battery. Solar cells remain expensive because they are manufactured from silicon crystals in cleanroom conditions. They are much less expensive than they were 10 or 20 years ago, but still fairly pricey. As a result, solar yard lights cost $10 to $20 per light.

The yard light shown here uses a single LED. More expensive lights may offer a combination of an LED and a small halogen flashlight bulb. The LED is on all the time, and the light bulb turns on for a minute or two when a motion sensor detects movement.

For more information on solar yard lights and related topics, check out the links on the next page.

How many solar cells would I need in order to provide all of the electricity that my house needs?
How the ZeroHouse Works
How to Run Your House Solely on Solar Power