Other Uses for Spud Guns 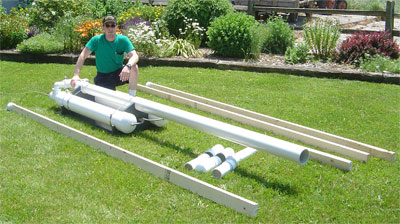 A custom air cannon built for use as a tornado simulator for the U.S. Department of Agriculture.
Photo courtesy The Spudgun Technology Center

Spud guns can be used for a variety of purposes other than recreationally firing potatoes at targets. The basic pneumatic spud gun design also powers t-shirt and confetti launchers often used at sporting events.

Suprise has designed a special effects air cannon, which creates fireballs, debris explosions and water effects for films. He has also created a tornado simulator for the United States Department of Agriculture: "It's a massive air cannon...its primary purpose is to fire a 12-foot-long, 15-pound chunk of 2 x 4 at a wall at 100 miles an hour, and that is to simulate the effect of flying debris during a tornado for the purpose of developing new building materials, building techniques, so on and so forth."

For some, a small device that fires a potato is not enough of a challenge. They instead use larger, heavier projectiles -- like pumpkins. There is even an annual World Championship Punkin Chunkin competition.

Next, we'll look at laws and safety precautions aimed at spud gun use.

Chamber-to-barrel ratios are a hot topic in the spud gun community. Enthusiasts are keenly interested in achieving a balance between power and safety. The ratio of the size of the chamber to the size of the barrel is one factor that can drastically affect a spud gun's range. Burnt Latke and Jack Armstrong, Spudkiller have lots of information on chamber-to-barrel ratios.