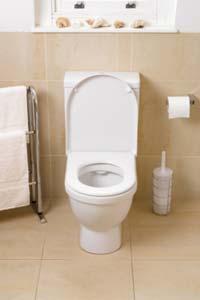 Standard tank toilets need water to enter the bowl at a high enough speed to activate the siphon and drain the bowl's contents.
Peter Dazeley/Getty Images

Understanding how tankless toilets work requires a quick review of how tank-style toilets work. You can read about this in greater detail in How Toilets Work, but as we mentioned in the previous section, tank toilets are gravity-powered. The basic idea is that water is dumped into the bowl fast enough to activate a siphon, which pulls the water and waste out of the bowl and into the drain line. Because of this gravity-powered flush assistance, tank toilets can function on a water pressure as low as 10 pounds per square inch (psi).

Tankless toilets are a different story. They use approximately the same amount of water as a tank-type toilet, but the water enters the fixture at a greater pressure. This is generally achieved by sending the water through the line at a higher rate of speed, though the size of the feed pipe is also a consideration. For the most part, commercial buildings and some residential structures have enough water pressure to power the flush of a tankless toilet without any sort of mechanical assistance. This type of tankless toilet is usually called a flushometer.

Flushometers vary in their requirements, but generally need at least 15 to 20 psi of water pressure to function properly, sometimes more. Urinals are an exception. They generally operate using the same basic principles as regular flush valve toilets, but they require less water pressure because of the nature of the material being flushed (liquid versus solid waste). For this reason, urinals can run on much smaller water supply lines. They also require much less water to complete a flush.