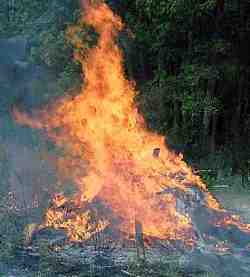 Let's say you take a glass of ice water or a bowl of hot soup and let them sit out on the kitchen table. You know what will happen: The bowl of soup will cool down to room temperature, and the glass of ice water will warm up to room temperature. This is a thermodynamic fact of life -- if you put any two objects with different temperatures together, then heat transfer will cause them to reach the same temperature. So a "room" and a "hot bowl of soup" reach the same temperature by the heat transfer process -- the room gets slightly warmer and the bowl of soup gets a lot colder.

The best example of this phenomenon would be to take a metal bar and heat one end of it. The other end will get warm and then hot through conduction. When you put a metal pan on the stove, the inside of the pan gets hot through conduction of the heat through the metal in the bottom of the pan. Some materials (namely metals) are better heat conductors than others (for example, plastics).

You can see all three of these heat transfer processes occurring when you stand next to a bonfire:

You probably need to stand at least 20 feet away from a big bonfire like this one. What keeps you away is heat radiating from the fire through infrared radiation. The flames and smoke are carried upward by convection: Air around the fire heats up and rises. The ground 3 feet beneath the fire will get hot, heated by conduction. The top layer of soil is directly heated (by radiation), and then the heat is conducted through layers of dirt deep into the ground.

To build a good thermos, what you want to do is reduce these three heat transfer phenomena as much as possible.