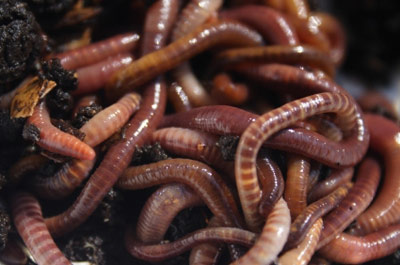 Red wigglers are considered by many to be the best compost worms. How many pounds do you need?
Suzanne Carter-Jackson/iStockphoto

What kind of worms do you want wiggling around your house? Red wigglers, of course. Red wigglers, or Eisenia foetida, are the best compost worms. Unlike your everyday night crawlers, they live well in close, highly populated conditions and don't burrow. In nature, you would almost never find a red wiggler worm heading deep underground.

If you decide to start a compost bin, you can get these red wigglers from any of a number of places. Like night crawlers, they make a tasty meal for fish, and bait shops often carry them. These usually come packaged in small containers and at a relatively high price. It's better to get your worms online from a reputable worm farm. The advantage to this is that they sell worms by the pound -- and knowing how much your worms weigh is vitally important to your compost. You should be able to get the worms for about $20 per pound plus shipping. Anybody who sells them for more is ripping you off. You can also get your worms from a neighbor who composts. You'll find when you begin vermicomposting that your worm population will double every 90 days or so. That's how you know that your worms are healthy and happy. Just be sure you weigh your worms before you put them in the bin.

Why is it important to weigh your worms? Fat worms are good. Red wiggler worms can eat about half of their weight in food every day. This means if you put one pound (16 ounces) of worms (about 1,000 worms) into your bin, you will be able to feed them one half of a pound (8 ounces) of food every day. The best way to decide how many worms you'll need for your bin is to weigh the amount of organic waste you throw away each day for about a week. When you know about how much you toss on average, buy twice as many pounds of worms as the amount of waste. For example, if you average one pound of organic waste per day, you should buy two pounds of worms.

Reports vary on how long worms will live. Some say only a few months, some say up to 10 years. No matter what, the worms will reproduce; however, you don't need to concern yourself with buying an equal number of male and female worms -- they're hermaphroditic. In other words, they have both male and female sex organs, yet it still takes two worms to reproduce.

Sexually mature worms have dark red bands around their necks. Every few months, they'll congregate into one huge, squiggling ball at the bottom of your bin. When you see that, you know that it's time to hang the "Do Not Disturb" sign.

Up next, find out how to build your own vermicomposting bin.

What happens when you throw your apple core out the window and say, "Don't worry, it's biodegradable?" When that apple core hits the ground, it's already being broken down by oxygen and other environmental factors. As it rests on the ground, a variety of critters begin to nibble at the core, helping to speed the breakdown process. Worms, flies and other insects arrive on the scene to get their share. As these decomposers digest, they help complete the cycle and turn that apple core into topsoil.