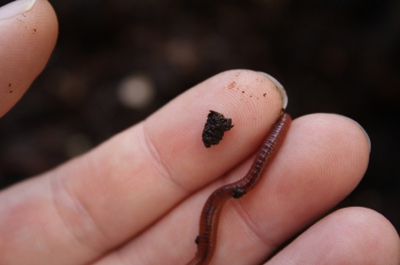 A red wiggler and some of its rich, black gold.
Suzanne Carter-Jackson/iStockphoto

Sifting your vermicompost material is relatively simple, if a little time consuming. The good stuff, sometimes called worm ­castings, will congregate at the bottom of the bin. To collect the castings, you can feed your worms heavily on one side of the bin, toward the top, and then wait for about a week. The worms will be attracted to the food and find their way over. At that time, you can move the bedding from the opposite side and start gathering the compost while they're busy eating. Attaching chicken wire to a wooden frame will make a perfectly acceptable sifting device, although some people prefer to use colanders or other screen-type materials.

Place your sifting device over an empty container, and use the screen to separate the worm castings from the worms and other large pieces of organic materials left behind. You can throw the worms and remaining organic pieces back into the bin.

When all is said and done, you're only after one thing -- black gold. And no, we're not talking oil here. Whatever you want to call it -- worm castings, tailings, solids, grit, dirt, humus, black gold, or even the "latter end of the digestive cycle," it's all one thing: worm poop.

The special thing about worm poop is that it's highly concentrated into some of the most nutrient-packed fertilizer that you can use. One University of Georgia study found that plants fertilized with worm castings saw a 126-percent higher growth rate than those treated with chemical fertilizers. Farmers know this, and they pay a lot more money for soil with worm castings in it.

In fact, there's a lot to be said for composting on a large scale for profit. With the current trend of eco-consciousness, people are always looking for ways to eat organic foods, keep unnecessary waste out of landfills and recycle. A lot of people are looking to start their own systems and want to know where they can get the worms. Worm farming is a lucrative business which -- with a good bit of start-up capital, marketing and patience -- can really pay off.

Red wigglers: Intestines of the world, or angels of the soil?
Suzanne Carter-Jackson/iStockphoto

A couple of examples of places that make vermicomposting part of their business practices are IKEA and the Len Foote Hike Inn. IKEA, the behemoth socially-responsible Swedish furniture company, is running a pilot program to compost, on a large scale, cafeteria leavings and office materials. Giant, sterile composting bins reside in trucks

that can move in and out of loading docks to make way for shipments.

The Len Foote Hike Inn, located in Dawsonville, Ga., houses a basement full of 10 giant worm bins and composts over 1,500 pounds (680.4 kilograms) of waste every year. They take the opportunity to teach guests about sustainable business practices and help others start their own composting bins.

Vermicomposting, it seems, truly is an "underground movement," with thousands of amateur and professional composters singing the praises of their little soil angels. Whether you're looking for a fun experiment

for the house, want to impress (or perhaps gross out) your kids, earn some extra money or recycle your credit card receipts, vermicomposting is a fun and environmentally sound hobby. And hey,

if it doesn't work out -- you can always go fishing.

Follow the links below for lots more information about worms, composting and other gardenin­g related topics.