Inside a Washing Machine 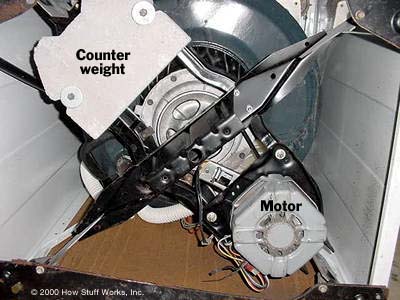 If we take a look under the washing machine, you'll see what makes it so heavy.

Yes, that is in fact a block of concrete in the picture above. The concrete is there to balance the equally heavy electric motor, which drives a very heavy gearbox that is attached to the steel inner tub. There are lots of heavy components in a washing machine.

The washing machine has two steel tubs. The inner tub is the one that holds the clothes. It has an agitator in the middle of it, and the sides are perforated with holes so that when the tub spins, the water can leave.

The outer tub, which seals in all the water, is bolted to the body of the washer. Because the inner tub vibrates and shakes during the wash cycle, it has to be mounted in a way that lets it move around without banging into other parts of the machine.

The picture above shows just the black metal frame, without the tub or gearbox. The cable that you see on the left side of the picture is the other end of the same cable that you see on the right side. There are a total of three pulleys, so that if one side of the frame moves up, the other side moves down. This system supports the weight of the heavy components, letting them move in such a way as not to shake the entire machine.

But, if all of these parts are just hanging by cables, why don't they swing around all the time?

A laundry machine has a damping system that uses friction to absorb some of the force from the vibrations.

In each of the four corners of the machine is a mechanism that works a little like a disc brake. The part attached to the washer frame is a spring. It squeezes two pads against the metal plate that is attached to the black frame. You can see where the pads have polished the plate from movement during vibration.

How much you know about motors in your washer and what they do? Test your knowledge with our Electric Motor Quiz!